The Best Bashyball Player in the World

Gobber the Belch is a Viking of the Hairy Hooligan Tribe, tasked with training Hooligan novices in the Dragon Initiation Program as well as other Viking classes.

Gobber is one of the few people to live and tell the tale of stealing How to Train Your Dragon by Professor Yobbish from the Meathead Public Library and from under the Hairy Scary Librarian's nose.

Gobber is tasked with training Hairy Hooligan teens in various skills needed to become a Viking: catching and training dragons, pirating skills, sword-fighting, and rudeness. He is incapable of speaking in any tone of voice other than a bellow. He has trained many students that became great warriors, being a capable warrior himself. He normally wears his small shorts. He believes Hiccup's group is the best group he has ever taught.

Gobber is considered an Elder amongst the Hairy Hooligan Tribe. As such, at a Thor'sday Thursday celebration in How to Train Your Dragon, when the Viking Initiates' dragon run amok, he was included in an Elder Huddle to decide their fate. Since the initiates failed to demonstrate control over their dragons, the Elder Huddle decided to exile all of them.

Gobber, along with 400 Viking warriors, try to yell at the Green Death to Go Away from Berk. The colossal dragon roars back, then slices Gobber's clothes off and flicks him back to Hooligan Village. He goes through the grass roof of his own house, and lands naked in his chair next to the fireplace. There are no clothes in the house except for his Cousin Agatha's dress. He puts it on and returns to the other Vikings to assist in other endeavors to make the Dragon leave.

In How to Be a Pirate, Gobber is indicated to be the head and teach of the Pirate Training Program for Hooligan novices. He leads all lessons, including 'Swordfighting at Sea (Beginners Only). He teaches with the same rough, no-nonsense approach as the Dragon Training Program.

How to Speak Dragonese begins with Gobber ordering about the Hooligan Novices in the Sea-Known-As-Woden's-Bathtub from his ship, the Fat Boar. Each novice is paired with another and captain a smaller ship of their own construction. They are to board a Peaceable fishing vessel as part of the 'Board-an-Enemy Ship' lesson.

After Hiccup and Fishlegs fail to retrieve a Peaceable helmet (but instead boarded a Roman Ship) and sink their boat - The Hopeful Puffin - in Hooligan Harbor, Gobber has harsh words for them at their lesson failure. He puts both boys on Limpet rations for three weeks.

Gobber takes the Hooligan novices to the Wrath of Thor and Mount Villainy in a sleigh pulled by Sabre-Tooth Driver Dragons across the completely frozen Sullen Sea. During this field trip, the students are to shoot as many Semi-Spotted Snowpeckers as possible with bows and arrows while skiing. After giving instructions, Gobber goes to sleep in the sleigh to await their return.

Later, Gobber referees a game of Smashsticks-on-Ice and claims that Vikings don't get sick, when Hiccup suggests that an ill Fishlegs ought not play. By the end of the Book, Gobber instead has become violently ill with the flu.

Life as a Slave

In the tenth book, Gobber is made a slave in the Amber Slavelands when he protested Alvin's kingship. He later joins the Dragonmarkers.

In the eleventh book, he is captured by Alvin and his beard is cut off, which is the ultimate Viking shame.

Gobber is a large muscular man with an unkempt beard. He also has a very loud voice. His yell "made the hairs on the back of Hiccup's neck stick straight up like the spines on a sea urchin."

He is further described as "a six-and-a-half-foot hairy muscle-bound lunatic, with a beard like a ferret having a fit and biceps the size of your head" in Book 2.

In Book 4 Gobber is compared to a grizzly bear. 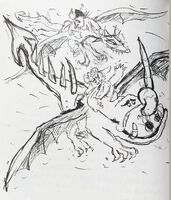 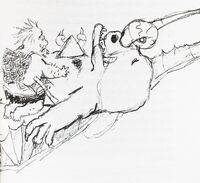 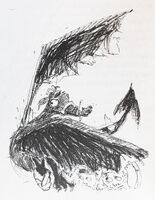 Retrieved from "https://howtotrainyourdragon.fandom.com/wiki/Gobber_the_Belch_(Books)?oldid=758220"
Community content is available under CC-BY-SA unless otherwise noted.