Gnawhelm is a Shovelhelm who appears in the game Dragons: Rise of Berk.

Gnawhelm is bright pink with cerulean blue and yellow whorls and swirls coating his back, wings, head, frill and tail. His claws are a darker shade of pink. His eyes are sky blue. Gnawhelm's tail is slightly thicker than that of the average Shovelhelm, but it ends in the ususal fan-like frill. His wings end in thick purple spines and he has a small, purple nasal horn.

It is stated that Gnawhelm enjoys eating colourful rocks, and searches all over Berk for his favorite snack. Whether this makes a difference to his magma spew is not revealed. As a Shovelhelm, Gnawhelm is capable of the ususal abilities and firepower. He is possibly more intelligent and observant than the average Shovelhelm, as he seems to be able to seek out specifically coloured rocks with success and devour them, based on his personal preferences. 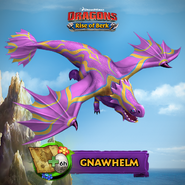 Retrieved from "https://howtotrainyourdragon.fandom.com/wiki/Gnawhelm?oldid=637082"
Community content is available under CC-BY-SA unless otherwise noted.