Gray in daytime, light in nighttime

Glow-worm, also spelled Glowworm, is a very small dragon that appears in the How to Train Your Dragon Book Series.

Glow-worms are small dragons that are depicted with rather small, perhaps vestigial wings. The exact source of their glow is not discussed, but it is shown as occurring over their entire bodies. During daylight hours they are a dull gray and most likely resemble an earthworm, but as soon as the sun sets, Glow-worms start to glow.

Interestingly, the very first time Glow-worms are mentioned, which is in book one How to Train Your Dragon, they are described as being large in size.

Glow-worms are classified as Cave Dragons in the The Incomplete Book of Dragons, but are mentioned as being Nanodragons in How to Train Your Viking.

The primary ability of the Glow-worm, is a bit self-explanatory - they are bioluminescent with a yellow glow. It is not specified if Glow-worms have any other abilities, such as fire-breathing.

Glow-worms are not known for their intelligence, so it is doubtful they can speak Dragonese. They are also common prey for other creatures, and are often a delicious food source for other dragons, as seen in How to Train Your Viking. Their fluorescent properties at nighttime evidently can occur even after the Glow-worm is eaten, for a time.

Glow-worms aren't trained, and it is questionable whether they have the mental capacity to be trained. However, they are utilized by Vikings as a light source at night or in caves.

Glow-worms are mentioned briefly when the Hooligan Novices enter the Dragon Nursery cave. However, here they are mentioned as being large, rather than small as seen in the other Books of the series.

How to Train Your Viking

Toothless is tricked into eating an entire barrel of Glow-worms by another rival dragon, so that he does not perform well that evening at night fishing. However, as the ingested Glow-worms start to glow in his belly that night, the fish are attracted to the boat.

Glow-worms are mentioned in this Reference Book. 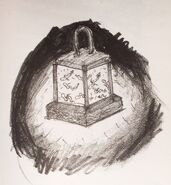 Glow-worms in a lantern