"Dragon Eye of the Beholder, Part 2"

Glacier Island first appears in Dragons: Race to the Edge as part of the Barbaric Archipelago. It later appears in three Games: Dragons: Rise of Berk, School of Dragons, and Dreamworks Dragons: Dawn of New Riders.

In all versions of Glacier Island, it is cold, rocky, and covered with ice and snow. There is little to no plantlife, though some hardy shrubs appear on the island in Dreamworks Dragons: Dawn of New Riders. The ground underneath the snow has caves which the resident Snow Wraith utilize. The island is also prone to tremendous zero-visibility snow storms.

In School of Dragons there is Saltwater fishing spots the player can fish at. The game also shows thick ice spreading out onto the sea around the island.

As told in "Dragon Eye of the Beholder, Part 2", many years ago, Gothi and two other Vikings ventured to the island seeking glacier water for healing purposes. However, they were ambushed by Gothi's Frostfright, a Snow Wraith. Only Gothi survived.

Later in "Snow Way Out", Heather, Ryker Grimborn, and his Dragon Hunters then went to the island to capture the Snow Wraith. However, they were stopped when Hiccup and his riders took the Snow Wraith pack to another island.

Glacier Island is also mentioned in a December 2017 Gauntlet Event, wherein Hiccup and Astrid travel there to follow clues on a map to find Bork's lost treasure. The clue is "The Wraith watches over the path in the cold, And under the ice is a hint for the Bold." The clue is a "B" shaped rock.

Glacier Island was one of several Islands that appeared with the release of the "Battle for the Edge" Expansion in December 2015. Players visited this island to complete an expansion-exclusive quest, which included healing a Snow Wraith with Prickleboggle breath. There are two fishing spots on this island for players to fish at for saltwater fish.

Glacier Island is also mentioned in the Stable Quest "Infrared Detector". The player must send stabled dragons (non-active) to Glacier Island to save stranded Vikings. The quest takes 24 hours to complete and rewards are: 700 coins, 1296 Dragon XP, and 100 UTD (player points).

In "The Hidden World" Expansion Pack, it is revealed that the Warlords have built a large camp on this island. The Dragon Riders attempt to destroy it, but fail every time they try.

Glacier Island appears in this game as a 'side' island that the player-controlled characters Scribbler and Patch can visit. They can find chests with resources in it, as well as a caged Skrill the duo must free. 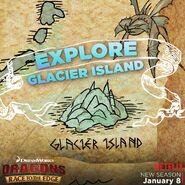 Footprints of a Snow Wraith in School of Dragons

Retrieved from "https://howtotrainyourdragon.fandom.com/wiki/Glacier_Island?oldid=385734"
Community content is available under CC-BY-SA unless otherwise noted.