Long, thick horns
Leaf-like lobs on along the back and neck
Two heads

The Ghastly Zapplejack is a large Mystery Class hybrid between a Hideous Zippleback and a Timberjack that first appeared in the game, Dragons: Titan Uprising.

Zapplejack eggs are oval, with a rough surface. They are light green with a hint of yellow on the base, and have large brown spots all over their surface.

Ghastly Zapplejacks possess the body of a Hideous Zippleback, but the heads, horns, and wings are that of a Timberjack. The patterns on their bodies are similar to those on a Zippleback.

Titan Wing Zapplejacks are considerably larger than their Broad Wing counterparts. They grow bigger and sharper spikes and claws, as well as longer horns. They grow extra lobes on the sides of their heads and the end of their tails becomes leaf-shaped.

Thanks to the inheritance from their parents, Ghastly Zapplejacks can breathe both oil-based fire and flammable gas, which can blind opponents due to its chemical composition.

Ghastly Zapplejacks have an immense jaw strength, both as individual heads and combined. They synchronise their two heads to bite at the same time, acting as a single, large head.

The Ghastly Zapplejack's behavior falls somewhere in between that of each parent. The two heads are very caring and protective of each other. Additionally, they are fairly passive and do not like conflict, even among other species. However, when goaded into acting, they can be fierce, protective fighters.

Ghastly Zapplejacks, particularly Orchard Zapplejacks, love fruit and can be easily befriended by presenting them with some.

The Ghastly Zapplejack was introduced in this game during the May 12, 2020 Thawfest event. A Zapplejack egg could be obtained by completing the event by collecting 17,000 medals through various minigames. 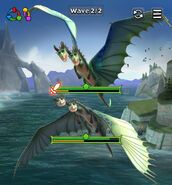 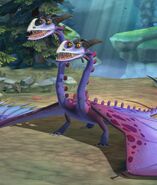 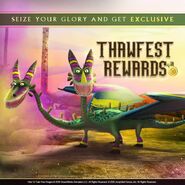 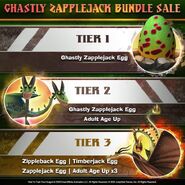 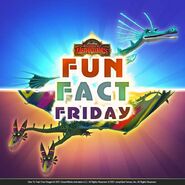 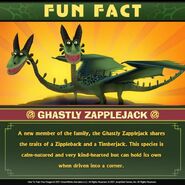