How to Train Your Dragon Wiki
Register
Don't have an account?
Sign In
Advertisement
in: People, Cast and Crew, Real Life,
and 8 more

Gerard James Butler is a Scottish actor who voiced Hiccup’s father Stoick the Vast in How to Train Your Dragon, the animated shorts Legend of the Boneknapper Dragon and Gift of the Night Fury, as well as the two sequels.

He was born on 13th November 1969. Butler achieved widespread fame for playing the lead role of King Leonidas in Zack Synder's fantasy war film 300. In his review of the first film, Roger Ebert joked that Butler seemed to be "channeling" his character of Leonidas when voicing Stoick. He also dryly noted how many of the Scandinavian Vikings in the film spoke with Scottish brogues, including Butler, Craig Ferguson (Gobber), and David Tennant (Spitelout). 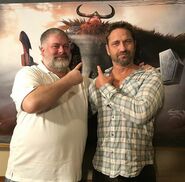