How to Train Your Dragon Wiki
Register
Don't have an account?
Sign In
Advertisement
in: Plants, School of Dragons, Dragons: Rise of Berk,
and 3 more

Fruits or fruiting plants are mentioned in the DreamWorks Dragons Franchise.

Fruit, scientifically, is the seed bearing organ, or structure, of an angiosperm plant (flowering plants). This includes everything from grains and grasses to berries to nuts. In layman's terms, however, fruit generally refers to seed-bearing structures that are generally edible for humans and generally would be termed sweet-tasting. Many vegetables like tomatoes and squash are also fruits, but are generally referred to a vegetables because of their more savory, less sweet taste.

Berries are a type of fruit in both common vernacular and scientifically, but are considered on their own page.

In both the Franchise and in real life, the primary usage of fruit is for consumption. Many fruits are used medicinally in many cultures aswell.

Some fruit seen in the Franchise are fictitious and are also seen as edible or as medicine.

Types of Fruits seen in the Franchise

In the episode "Appetite for Destruction", Fishlegs decides to tag dragons living on different islands to study them. The dragons belonging to Sunstone Island, including the Exiled Monstrous Nightmare were tagged with a "burnt apricot" color, according to Fishlegs.

Apricots are typically the fruits of Prunus armeniaca, but several other Prunus species are also called 'Apricots'. The fruits most commonly seen originated from the Middle East and prefer a warm climate to grow. Historical Vikings would not have been able to grow these fruits, but it is possible they came across them during trade and raiding in the Mediterranean and Eastern Europe.

Discarded banana peels are seen in the trash that escaped sheep get into in the Dragons: Riders of Berk comic Dangers of the Deep.

Bananas (Genus Musa) are an elongated fruit with commonly yellow skins when ripe, though color can vary. They are also called Plantains and may be sweet or savory. Bananas are a tropical fruit unseen in Scandinavia, however, travelling Vikings may have come across them on their more Southerly trade routes.

Ficus carica, or the Common Fig, is a fruit that has been cultivated in Asia for millennia. It is a pear-shaped fruit with green, brown, or purple skin and typically a red interior. They can be eaten fresh, dried, or made into jams or spreads.

Gobber mentioned figs when discussing three new traders that arrived at Berk to replace Johann after his betrayal. In "No Bark, All Bite". Though not grown in Europe and certainly not in the Viking Age, historical Vikings may have encountered figs during trade with the Middle East.

Fruit in the How to Train Your Dragon (game)

In the Nintendo DS version of this game, Snotlout fools Hiccup by indicating that this fruit is needed for another rider because he is ill. This causes Hiccup to loose time in the quests for the Thors'day Thursday Tournament. However, the game does note that it is a "Fruit whose leaves have burn-soothing properties".

The lemon (Citrus limon) is a tree of the family Rutaceae, originating from Asia. Its yellow fruit contains 5-6% citric acid, giving it the characteristic sour taste.

The lemon is only mentioned in the game School of Dragons. Bork used lemon juice ink to write information about the Luminous Krayfin, which he didn't include in the Book of Dragons.

Lemons were mentioned again in School of Dragons during the player quest, "A Slick Solution", when Eret recommends using lemon juice to clean up pine tar.

The smaller dark fruit in the background of the Dragons: Rise of Berk image below may be Lychee fruit. These are an item that can be purchased from Trader Johann's Ship in order to complete collections in the game.

The Lychee (Litchi chinensis) is a native of the warm moist climates of China. The fruit has a hard exterior, but the interior is soft, edible, and sweet. 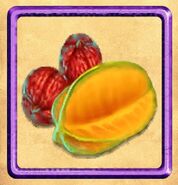 Phlegma mentions mangoes during a quest in the "Secret of the Leviathan" Expansion in School of Dragons.

Papayas are mentioned very briefly in the Dragons: Race to the Edge, Season 5 episode "A Matter of Perspective". Tuffnut uses it as an exclamation, ironically, during a food fight with Vanaheim Fruit.

Papaya (Carica papaya) is a tropical yellow pear-shaped fruit native to Central and South America. It is, however, currently cultivated in other tropical regions across the equator.

Peaches are seen as part of the wares the new Traders bring to Berk in the episode "No Bark, All Bite" of Dragons: Race to the Edge, Season 6.

Peaches (Prunus persica) were originally cultivated in China many millennia ago, but made their way to the Middle East and then to Southern Europe over 2000 years ago. The Spanish brought peaches to the Americas in the 1600's. Peaches are a fleshy stone fruit with an orange interior and a fuzzy coating on its surface.

Pinapples (Ananas comosus) are a tropical fruit that has the appearance of a pine cone (but is not related to pine trees). It is actually a collection of fruit structures tightly clustered together.

Pinapples are mentioned by Tuffnut in the Dragons: Race to the Edge, Season 3 episode, "Buffalord Soldier".

Abundant yellow fruits appear on Slitherwing Island in the Dragons: Race to the Edge, Season 5 episode, "No Dragon Left Behind". The fruit somewhat resemble lemons, in that they are ovoid and yellow. The small trees the fruit are growing from also greatly resemble lemon trees by shape, stature, and leaf type. However, the fruits are not specifically named. Yellow mangoes or other fruit is also possible, as well as something fictitious. Death Songs, particularly Garffiljorg, seem to like eating this fruit.

Starfruit, also called Carambola Averrhoa carambola, are fruits of a tree native to some warmer parts of Asia. This strangely shaped fruit is green, yellow, or orange in color and has five deep ridges down its length. When cut open cross-wise, it has the shape of a five-pointed star.

Starfruit is seen as a collection item that can be purchased from Trader Johann to complete collections, an activity in the game, Dragons: Rise of Berk.

This fruit grows on a deciduous-appearing tree on rocky terrain in sunlight. The fruit appears to be a mix of nectarine, plum, and tomato. It is not a stone fruit like a plum, but may have small seeds like a tomato. It is edible by humans, shown by Ruffnut and Tuffnut when they first arrive on the island.

The fruit occurring on Vanaheim is edible to both humans, as well as dragons living there - the Sentinel dragons and the sick dragons that immigrate there. The fruit is seen in the episodes "A Matter of Perspective" and "Guardians of Vanaheim". It appears to be edible to all dragons, regardless of their usual diet.

The Vanaheim fruit tree also appears in the game, School of Dragons at the release of the Expansion "Wrath of Stormheart".

In "A Matter of Perspective"

In "Guardians of Vanaheim" 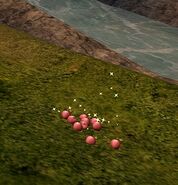 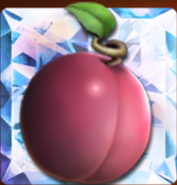