Additional scale plating along back

The Frozen Groncicle is a subspecies of Groncicle that are born in the coldest, oldest glacier ice.

The Frozen Groncicle appears similar to all other Groncicles in Dragons: Rise of Berk, but it is pinkish purple in coloration and has plates upon its back. They appear to be carved from the coldest and oldest glacier ice. 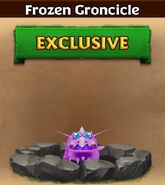