Frostfright's Lil Sis is a female Snow Wraith who first appeared in "Snow Way Out".

This dragon appeared along with her sibling Frostfright and their older brother when Hiccup and the gang tried to relocate them. The trio fought the dragon riders and then tried to escape. Unfortunately, they were captured by Ryker Grimborn and the his Dragon Hunters. The Dragon Riders saved them and moved them on another island.

She appears as an exclusive dragon in the game, where she is given a purple tint and orange features to differentiate her from other Snow Wraiths in the game.

Frostfright's Lil Sis looks like a normal white Snow Wraith, but in Dragons: Rise of Berk, she is tinted purple with orange wings, spikes, and calls to be differentiate her from the other Snow Wraiths.

In "Snow Way Out" 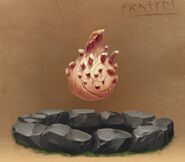 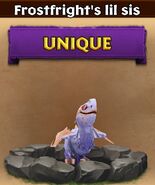 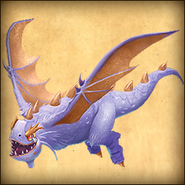 Retrieved from "https://howtotrainyourdragon.fandom.com/wiki/Frostfright%27s_Lil_Sis?oldid=530873"
Community content is available under CC-BY-SA unless otherwise noted.