Frey is a boy that appears in the comic "Snowmageddon" and the mini-comic, "Thaw Fleet".

Chilblain sends iron ore to Berk and other locations very punctually, however, Gobber notices of late, they have not received any iron at all. Concerned, some of the Hairy Hooligan Tribe and the Dragon Riders sail to chilly Chilblain to find out about the lack of deliveries. They find that the village is in chaos from the arrival of Dragons and the eruption of Mount Ymir.

Unlike Kettil, Frey is not seen taking a crash-course in dragon-training. He appears later in the Comic riding what appears to be a Typhoomerang, helping move his people to safety. It is unknown at what point in the crisis he was able to train a dragon.

Frey is a lean boy that appears to be about the same age as Hiccup in the Dragons: Defenders of Berk series. He has brown scraggly hair that hangs roughly to his chin. In the Comic he wears a red tunic with a brown sleeveless vest. He also has a unique helmet - it has two horns, one pointing up and the other pointing down.

However, his clothing color does not remain consistent throughout the comic - in later panels his clothing becomes mostly shades of green. His helmet, however, remains fairly consistent. 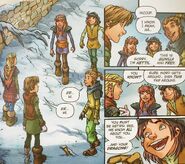 Starting a game of "Snowmageddon"

Frey is seen at the bottom middle riding a brown Dragon, in green clothes

Frey assisting with rebuilding his village on a brown dragon 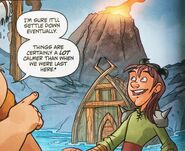