Unknown (someone from Berk)

Four-Man is a Catastrophic Quaken that first appeared in Dragons: Rise of Berk.

This dragon is mostly orange, with brown stripes on its back and legs. It has yellow wings with brown edges. It has a yellow spot on each of its legs and one on its head. Its spikes are covered in white and red stripes.

Four-Man is described as a "moody" dragon, suggesting it may have a grumpy personality. Despite that, it works with humans and other dragons on Berk. 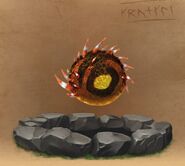 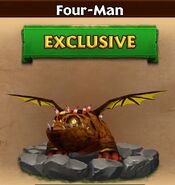 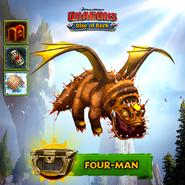 Retrieved from "https://howtotrainyourdragon.fandom.com/wiki/Four-Man?oldid=530562"
Community content is available under CC-BY-SA unless otherwise noted.