Skuld the Sorceress
Snorre the Vast

Flem was a Viking of the Thunderhead Tribe, seen in the comic, "The Endless Night".

A Ruse for the Hooligans

Flem was found by Hiccup in a dilapidated ship that was about to sink. After getting to shore, Flem told a story about his people, that they had all disappeared after a sorceress appeared and cursed them. Soon after his story, Skuld the Sorceress appears on Berk and curses the Hooligans as well. The day turns to night and Hooligans start disappearing.

Later, after the Dragon Riders do some sleuthing, find out that the Thunderhead Tribe has been kidnapping villagers and that the day turning night was in fact a natural phenomenon - an eclipse. The Riders fight the Thunderhead Vikings and drive them away, with Flem swimming after them to not be left behind.

Flem is a well built Viking, with shoulder length blond hair, a helmet with very sharp horns, and slight mustache. He wears a long sleeved green tunic, under a brown vest with mail on the top. He also has dark green pants, and brown boots. 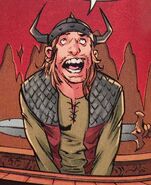 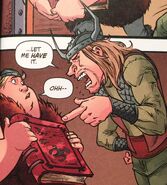