Flashfright is a Premium Fireworm Queen trained by Spitelout Jorgenson. She first appeared in Dragons: Rise of Berk.

Flashfright is a bright Red Fireworm with light-ish blue spots dotting its back. It has orange wings with darker hints and white specks. It also has orange spots running along the edges of its underbelly. However, much unlike other Fireworms, Flashfright possesses three fin-like appendages on its head instead of the standard crown-like horns. Its tail also has an additional fin-like frill.

Much like the Armorwing, the flames emitted by this Fireworm can temporarily disorient its opponents. It generates this by flapping its wings to create a solar flare. 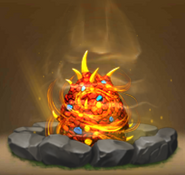 Retrieved from "https://howtotrainyourdragon.fandom.com/wiki/Flashfright?oldid=570505"
Community content is available under CC-BY-SA unless otherwise noted.