The Flame Whipper is a medium-sized Stoker Class dragon that first appeared in School of Dragons.

Flame Whipper eggs are colored blue on the center while the bottom and top gradients to a shade of bright yellow. The egg is also covered in black patterned stripes and spots.

Flame Whippers come in many different color combinations, but traditional ones have yellow heads, shoulders, and sections of their tails. The rest of their body is mostly blue. They have black stripes running over their body and the underneath of their wings is orange. Small spines run along their back and tails, as well as the side of their tails. 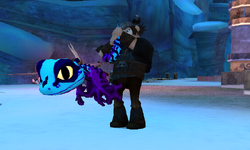 Like a gecko, the Flame Whipper can detach its tail if it is in danger. It can do this due to a break in-between the spinal bones in its back and tail, which allow it's tail to detach on command. The tail wiggles once detached, attracting predators to it. However, the tail is filled with an acidic poison that can briefly paralyze predators, making them think twice before attacking another Flame Whipper. 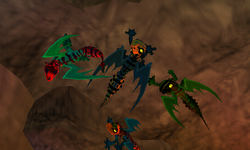 The Flame Whipper is capable of walking on walls. Due to its gecko-like body, it is likely it has sticky toe-pads that allow it to stick to walls like a gecko. The Flame Whipper can even stay upside down on slippery surfaces, such as the ceiling of a cave, with little to no struggle. 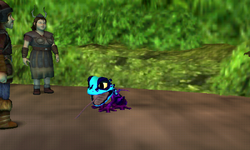 The Flame Whipper's tongue is capable of being stretched to a decent length, which likely helps in catching food. It can also use this tongue to help aim its fire, increasing its accuracy.

The Flame Whipper shoots swirling explosions of fire, which can be made more accurate thanks to its stretchable tongue. Unlike other dragons' fire, which tends to hit the target as one mass, a Flame Whipper's fire is lashed on.

The Flame Whippers are very territorial and aggressive dragons. They live in packs and are very protective of their young. If humans enter their nest, the Flame Whippers will follow them to make sure they don't represent a threat and even attack them to keep them out of their territory. Flame Whippers are easiest to train as babies or juveniles, but adults are normally untrainable.

On the contrary, the babies are very curious and will sometimes wander off by themselves to explore their surroundings.

The Flame Whipper's poison does have an antidote, which is created by neutralizing its acidity. According to School of Dragons, 17 base droplets are necessary to undo the poison's effects.

The Flame Whipper first appeared in this game in the expansion pack, "Secret of the Leviathan".

Retrieved from "https://howtotrainyourdragon.fandom.com/wiki/Flame_Whipper?oldid=759533"
Community content is available under CC-BY-SA unless otherwise noted.