How to Train Your Dragon Wiki
Register
Don't have an account?
Sign In
Advertisement
in: Objects, Franchise Objects, Hiccup's Gear (Franchise)

The Flame-Tastic Inferno-Class Firepower-Plus was a device that used dragon fire to smelt metals significantly quicker than a normal blacksmith could on his or her own. It was seen in the mini-comic Smeltdown.

The Flame-Tastic Inferno-Class Firepower-Plus used dragon power over the course of five steps to smelt metal more quickly. First, Meatlug would chew up several ore-bearing rocks, which she would grind down into a much more usable mulch. The rocks were then carried into the machine by a conveyor belt, where Barf and Belch would use their fire to smelt the metal, finishing the process.

After witnessing Fiske's mining operations in the Caves of Jotunn, Hiccup came up with the idea to use dragon power to smelt metal. After building this machine, he informed Gobber of this idea, who was very interested, and recruited Fishlegs, Ruffnut and Tuffnut to help out. Astrid and Snotlout, knowing about the usual success rate of Hiccup's inventions, bet each other that it would soon be destroyed. While it did work for a time, Ruffnut and Tuffnut eventually got bored with making metal and fed Barf and Belch several varieties of meat, none of which agreed with them. The fire from the Hideous Zippleback caused the entire machine to violently explode, blowing a hole in the roof of Gobber's forge and blasting pieces of the contraption into the ocean, nearly breaking off parts of a Viking longship. Stoick admonished Hiccup for the explosion, even though it wasn't Hiccup's fault, and told Gobber to never listen to Hiccup's ideas again. Astrid and Snotlout claimed their bet was a draw, while the Twins cheered about the chaos they created. 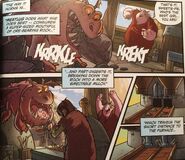