How to Train Your Dragon Wiki
Register
Don't have an account?
Sign In
Advertisement
in: Buildings, Dragons: Race to the Edge, Fishlegs Ingerman

Fishlegs' Hut is one of the huts on Dragon's Edge, belonging to Fishlegs Ingerman.

Fishlegs' Hut has a deeply sloping, rounded roof and is taller at the front then slopes lower in the rear. There is a stylized Gronckle figurehead at the front apex, as well as large decorative 'wings' and yellow and purple painted spots mimicking a Gronckle's bumps. There is a wooden platform extending out from the front.

Fishlegs' Hut is built of a large sea stack which is situated very close to the main landmass and is bridged the short distance with a wood platform. He also has a small rocky pool to the side of the hut.

Fishlegs' hut has an open plant with no rooms in the interior. The hut has shelving to put his collectibles on, as well as a table and chairs.

Fishlegs has a small single-size wooden bed with no mattress. Meatlug sleeps beside the bed.

Fishlegs' Rock garden is located to the left of the hut on top of the sea stack. It contains a small pool with calm, clear water.

Fishleg's Hut provides him and Meatlug protection from the elements, refuge, and moments of solitude when needed, during his stay at Dragon's Edge.

Fishleg's Hut on Dragon's Edge is seen in various episodes throughout the entire Dragons: Race to the Edge series. Highlighted appearances are listed below.

In "When Darkness Falls", once the Dragon Riders find an ideal island to set up an outpost, they draft up their new base. Each Rider has their own unique ideas about its design, and argue about it. Hiccup finally devises a set-up that allows each Rider to have an area to design as they please and also a central area for all of them.

In "Snotlout Gets the Axe", Fishlegs and Ruffnut think that they were accidentally married by Tuffnut. Ruffnut moves in with Fishlegs, dumping all his things out on the deck, and moving in her things such as a stuffed shark.

The Twins and Snotlout raid Fishlegs' Hut to figure out who he has been getting Terror Mail. Fishlegs had been corresponding with Heather.

In "Not Lout", Snotlout attempts to be a 'good leader' and asks Fishlegs if he needs help in his zen garden. Fishlegs begins explaining plant light requirements for growth when the Twins arrive with dead flowers, which Snotlout had stolen earlier from Fishlegs' garden.

Fishlegs' Hut, along with the rest of the Dragon's Edge buildings are under threat from an erupting volcano. Fishlegs' hut is somewhat safer than the other buildings because it is built on a sea stack.

The Dragon Riders leave the edge and their huts to return to Berk.

Model seen in "When Darkness Falls"

In the background of "Gone Gustav Gone"

Background in "Crushing It"

Background in "Snotlout Gets the Axe"

Background in "The Zippleback Experience"

In "To Heather or Not to Heather"

In "Living on the Edge"

In "Loyal Order of Ingerman" 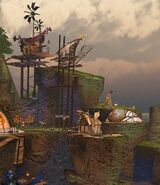 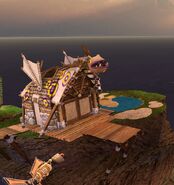