How to Train Your Dragon Wiki
Register
Don't have an account?
Sign In
Advertisement
in: Animals, Dragons: Rise of Berk, Dragons Hero Portal

Fireflies are insects that appear minimally in DreamWorks Dragons Franchise.

Fireflies (or "lightning bugs") are a family of beetles of the order Coleoptera known for their ability to produce light. Through the use of specialized organs in their abdomens, they’re able to set off chemical reactions that result in a blinking or glowing light. This process is commonly known as bio-luminescence. Some fireflies blink their lights on and off in fancy patterns, others just emit a steady glow, and some can’t do either of those things. In fact, despite their common name, many firefly species are unable to produce any light at all.

The life cycle of a firefly is called metamorphosis. They start out as eggs in the ground and then quickly grow into larvae (sometimes called glowworms), which can spend up to several years underground. In the spring, the larvae turn into pupae and, subsequently, adult beetles.

Fireflies do not have a function in the franchise, nor in real life.

Clusters of fireflies appear in the game as a collectible item for the player to gain energy for their dragon.

During the Eternal Night updates (which are around Halloween), fireflies can be seen flying around Berk. Fireflies that emit bright pink light surround Radiant Meadows, the in-game location of the Light Fury.

Festive Fireflies were introduced in this game with the 1.49 update as a seasonal currency, which can only be used for a limited time. Festive Fireflies could be obtained from Gobber's Duties, daily logins, and Gauntlet Events, and could be used to buy certain dragons, costumes, and seasonal decorations.

One of the decorations was called "Firefly Hangout" (a bush with a few fireflies flying around it), and it cost 50 Festive Fireflies. Another decoration consisting of a small pond with blue fireflies hovering over it, named Amsvartnir, was introduced in the game with the 1.51 update. It costs 300 Dreadfall Delights and requires 20 minutes to be built.

During Dreadfall updates (around Halloween), buzzing fireflies can be seen flying in the background of dragon roosts. 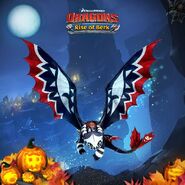 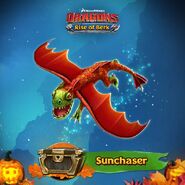 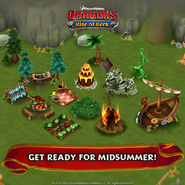 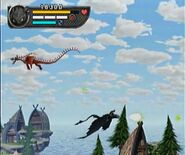 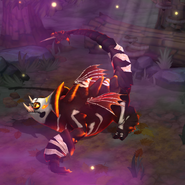 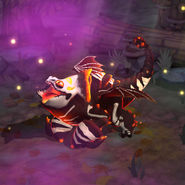 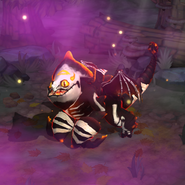