How to Train Your Dragon Wiki
Register
Don't have an account?
Sign In
Advertisement
in: Dragons, Dragon Species from the Books, How to Twist a Dragon's Tale,
and 5 more

The color of Flames

The Fire Dragon appears only in Book 5 in the How to Train Your Dragon Book Series.

The Fire Dragon is a rare dragon that lives inside volcanoes and is rarely seen. Fire Dragons are extremely huge and have scales lit on fire, to the point that the dragon seems entirely made of flames. Other than this, Fire Dragons have two pairs of legs, a pair of wings, and the standard spade tail.

Their abilities may also be their weaknesses. Fire Dragons are very specialized and have a particular diet and particular hatching conditions. While they can only be hatched by an erupting volcano, the chemicals in the egg stop the volcano from erupting. Once they hatch, they feast exclusively on Exterminator Dragons (and the odd human).

The volcano on Lava-Lout Island is erupting, threatening the entire Archipelago. Not only that, but Exterminators are hatching in large numbers because of it and wreaking havoc on the islands. Hiccup and company try to save the day by tossing in the speaking stone from the Viking Thing meetings into the volcano. He thinks he is too late when the volcano starts erupting, but soon realizes that the stone is actually a dragon egg that only hatches in an erupting volcano. A Fire Dragon emerges, consumes all the Exterminators, then retreats into the volcano to live, never seen again. 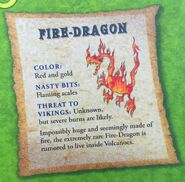