How to Train Your Dragon Wiki
Register
Don't have an account?
Sign In
Advertisement
in: Tribes, Book Tribes, How to Cheat a Dragon's Curse

How to Cheat a Dragon's Curse (mentioned)

Not much is told about the origins of the Feather People in the Book series. However, it is widely assumed that the Feather People are meant to represent Native Americans because they live in America and the chief wears feathers. In actual history, the Vikings were, in fact, the first Europeans to arrive in the Americas, specifically Northern North America, and they did encounter native peoples.

There is increasing evidence that Vikings may have arrived in the Arctic North America to hunt for seals and walruses, as well as trade with native peoples, such as the Dorsets or the Thule peoples. Vikings may have even established temporary hunting and treading camps in the northern most Canadian islands.

Famously, the Vikings colonized the Southern tip of Greenland led by Erik the Red from Iceland. But as the climate changed, the Viking colony eventually vanished. Erik the Red's children - Lief Ericsson, Thorvald, and Freydis, all visited North America further west. Lief encountered three 'lands' he named Helluland (land of the flat stones), Markland (land of forests), and Vinland (land of wine). These probably correspond with Baffin Island, Labrador, and Newfoundland, respectively.

In How to Cheat a Dragon's Curse, Old Wrinkly tells Hiccup about the story of Bigjob and his voyage to America. In it the Feather people are describes as "Friendly natives" who gifted Bigjob their arrows. He later used all of them, save one, to fight against the Doomfang.

The remaining arrow is described as "gaudy" and "decorated with brilliant feathers taken from birds Hiccup would not have recognized. American birds that once flew about in undiscovered American skies."

In How to Ride a Dragon's Storm, the Feather People are seen briefly on the shores of America. Hiccup thinks that they do not look friendly to invaders, and realizes that he should try to fix problems in the Old World before entering the New. 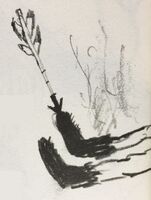 Norse colonization of the Americas on Wikipedia