This Death Song is bright pink, but has a grayish blue underbelly. The intricate blue patterns on its wings form dots and waves, and stretch all the way from its wings to tail. 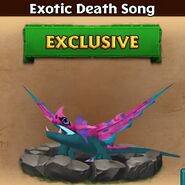 Retrieved from "https://howtotrainyourdragon.fandom.com/wiki/Exotic_Death_Song?oldid=433178"
Community content is available under CC-BY-SA unless otherwise noted.