How to Train Your Dragon Wiki
Register
Don't have an account?
Sign In
Advertisement
in: Ships, Objects, Dragons: Rise of Berk,
and 4 more

Eret's Ship is a ship used by Eret, Son of Eret and his professional dragon trappers. It is used to carry the perfect dragons for Drago Bludvist's dragon army.

Before he changed sides, Eret brought dragons to Drago by putting the dragons in a cage bellow deck, or strapped down above. His ship has two blue sails with white markings. This ship is seen in the scene where Hiccup and Astrid tried to change Eret's mind about dragons and when Astrid kidnapped Eret to tell her where Drago was hiding.

His boat, unlike a typical Viking longship, looks more like a yacht. It has two blue sails with white patterns on them. Its wooden deck has several dragon cages below it. This boat is the length of two dragons, so it is quite small, but big enough to carry several men and dragons. It is equipped with giant cross-bows that shoot out nets to capture dragons.

In the game, School of Dragons, Eret's ship appears to be a standard Berkian Viking longship. It has one mast and sail, and dragon figurehead, and a row of round shields on each side.

Eret's ship in the end credits 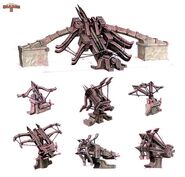 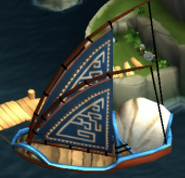 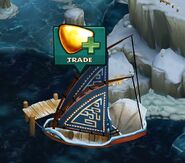 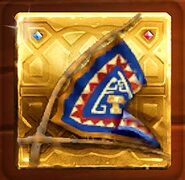 Eret's Ship in School of Dragons 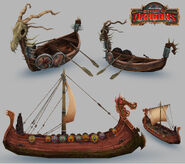