Unknown (but at least a thousand years before Hiccup the Third

The Endeavour - or Endeavor in the US - is the sword of Hiccup Horrendous Haddock III, which he acquired in How to Be a Pirate and uses in every book thereafter.

During the time of Hiccup Horrendous Haddock I, Endeavor was known as the Dragonsword and was kept inside the fire pit under what would eventually become Flashburn's School of Swordfighting which was guarded by a dragon the Wodensfang described as being terrible. Inside the Dragonsword's pommel, there was a little compartment which housed the Dragon Jewel. The Wodensfang stole the sword after befriending Hiccup I and gave it to him which he then used the jewel to end the war between humans and dragons.

In How to Be a Pirate, when Hiccup, Fishlegs, and Alvin the Treacherous wound up in the cave and Alvin attacked Hiccup, Toothless grabbed the nearest available sword that he could lift and tossed it to Hiccup. The sword looked unimpressive, but allowed Hiccup to discover that he was actually a talented sword-fighter when using his left hand, and hold off Alvin.

After escaping from the cave, Hiccup brought the sword with him. After a dream in which Grimbeard spoke to him, Hiccup looked closer at the sword's pommel and found a hollow where Grimbeard's true will was concealed. The will revealed the sword's true identity, and thus Hiccup fulfilled the prophecy that only Grimbeard's "true heir" would find his treasure, and his legendary sword (this was originally thought to be either Snotface Snotlout, who found a much smaller treasure chest from Grimbeard's hoard, or Alvin, who had found the Stormblade). Hiccup also took the Dragonsword to his grandfather Old Wrinkly to name it because none of them knew of its name (supposedly, though Old Wrinkly could possibly have known it) and thus the Dragonsword was given the name of Endeavor which means a heroic attempt.

During the events of How to Speak Dragonese, Hiccup fought Alvin again with Endeavor.

As shown in How to Cheat a Dragon's Curse, Hiccup fought Norbert the Nutjob with Endeavor.

Once again in How to Twist a Dragon's Tale, Hiccup fought using Endeavor.

During the event of A Hero's Guide to Deadly Dragons, after Hiccup ended up in the Meathead Public Library, he came into conflict with the Hairy Scary Librarian, and so Hiccup fought him with Endeavor.

In How to Ride a Dragon's Storm, Hiccup once again used Endeavor.

As shown in How to Break a Dragon's Heart, Hiccup fights Alvin with Endeavour. Endeavour also saves Hiccup's life, when Alvin is trying to kill him, but Excellinor the Witch commands Alivn to save Hiccup because they need the sword.

During the events of How to Steal a Dragon's Sword, Hiccup met the Wodensfang in the fire pit and learned of Endeavor's history during the time of Hiccup the First. Sadly the sword was taken away from Hiccup by Alvin after Hiccup was revealed to have the Slavemark.

In How to Seize a Dragon's Jewel, Alvin was seen with Endeavor in a sheath on him next to the Stormblade.

As shown in How to Betray a Dragon's Hero, Hiccup attempted to steal back Endeavor as well as the rest of the King's Lost Things.

During the events of How to Fight a Dragon's Fury, Hiccup regains Endeavor with the rest of the King's Lost things when they are given to him by the Druid Guardian after the Dragon Guardians of Tomorrow agree he is the right individual to be crowned King.

In the epilogue Hiccup recalls his dream he spoke about back in the epilogue of How to Be a Pirate, where Grimbeard the Ghastly threw Endeavor up into the air, then his own left hand reached out across space and time to grab it. Hiccup states, now he dreams he is the one throwing the sword into the air, and that it's up to the reader to catch it.

The Endeavor is described as "something smaller, an undistinguished but serviceable object, a bit rusty at the edges perhaps." It contains none of the ornate details of other flashier swords such as the Stormblade. 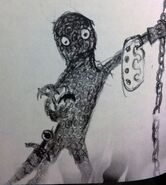 Hiccup wearing his Fire-Suit with Endeavor sheathed on him. 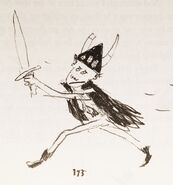 In How to Speak Dragonese
Add a photo to this gallery

Retrieved from "https://howtotrainyourdragon.fandom.com/wiki/Endeavour?oldid=530114"
Community content is available under CC-BY-SA unless otherwise noted.