How to Train Your Dragon Wiki
Register
Don't have an account?
Sign In
Advertisement
in: Plants, School of Dragons, Dragons: Race to the Edge

"Enemy of My Enemy"

The Elm Tree is mentioned briefly in the DreamWorks Dragons Franchise.

The elm is a Genus (Ulmus) of trees occurring throughout Europe, in Asia, and North America. It is deciduous and typically can grow very large, depending on the species. Three species historical Vikings may have come across are the Scots elm (Ulmus glabra), European white elm (Ulmus laevis), and the field elm (Ulmus minor). The first, Scots elm, was the most widespread in Scandinavia.

Elm in the Franchise and in reality is primarily used for its wood. The wood grain is often very erratic, and the color dark, making for handsome wooden objects such as furniture. The wood is resistant to decay, dense, and pliable.

In real life, some parts of the Elm are also edible. Leaves and twigs are sometimes fed as livestock food. Humans can eat the bark when boiled and also the seeds, though this has mostly been limited to times of famine. Elms are also sometimes planted as a shade or avenue tree in temperate climate regions.

In the episode, "Enemy of My Enemy", Dagur the Deranged and Hiccup look for certain plants to concoct and antidote to Dragon Root poisoning. One plant is the Fire Fern.

Elm trees are mentioned in the Quest, "A Gift for Hiccup". Gobber wants to make Hiccup his own ceremonial axe, now that he is chief. The player needs to collect parts for Gobber to assemble. Phlegma provides a sturdy handle made of elm. 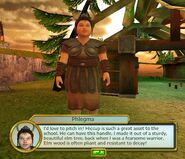