How to Train Your Dragon Wiki
Register
Don't have an account?
Sign In
Advertisement
in: Dragons, Dragon Species from the Books, How to Steal a Dragon's Sword,
and 6 more

Electricstickies are very primitive cave dragons described in How to Steal a Dragon's Sword.

Electricstickies are described as "cave-dwelling jellyfish". Their depictions appear nearly invertebral and translucent, and not very dragon-like at all.

There is some variation in depiction of Electricstickies, mostly in their tendrils. Some pictures show short hair-like filaments, but in The Incomplete Book of Dragons they are shown with very long tendrils with intermittent bulbs on them.

Electricstickies can stick to cave walls by secreting a substance from their rear - presumably some sort of sticky fecal matter, as "they aren't very hygienic".

Their main ability, however, is being able to give off an electric charge if bothered. The voltage is enough to deter raging Riproarer dragons, but not enough to kill a human.

Electricstickies appear in the caves beneath Flashburn's School of Swordfighting, and are described by Hiccup when he and Fishlegs are forced to enter the caves by Excellinor the Witch.

Electricstickies make an appearance in the Cave Dragons chapter of this reference book. 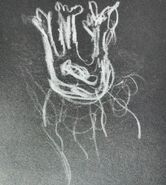