How to Train Your Dragon Wiki
Register
Don't have an account?
Sign In
Advertisement
in: Dragons, Dragon Species from the Books, Bog Dragon Class,
and 4 more

The Eight-Legged Battlegore is a Bog Dragon featured in The Incomplete Book of Dragons. This species also made a small appearance in How to Fight a Dragon's Fury, the final book in the series.

Battlegores are quite large, capable of carrying up to ten armored adult Vikings at a time. They have an appearance similar to a Triceratops dinosaur, with a large frill coming from the back of their heads and protecting their necks. Battlegores also have horns sprouting from their faces, with a particularly large one from its nose.

As their name implies, Eight-Legged Battlegores have eight legs. They are also noted as having multiple heads, though the one depicted only has one.

Considering their size and bulk, Battlegores are relatively quick on their feet and in the air.

Battlegores can be tricked, as seen in The Incomplete Book of Dragons. If you exclaim in Dragonese that you just saw a Seadragonus Giganticus Maximus, a Battlegore may turn tail and run, before checking to see if you are correct. This serves to illustrate gullibility rather than cowardice.

Battlegores are used by Vikings for riding, particularly into battle. They can also be used as driving dragons—presumably pulling heavy battle equipment.

Battlegores sided with the humans during the Second Dragon War.

Battlegores are detailed in this reference book, and also appear in the Dragon Key table in the back of the book.

Battlegores appeared in this final Book during the war, flying into battle with Vikings upon their backs. 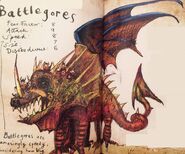