Edge Nadder is the name given to a group of Deadly Nadders who were first introduced in Dragons: Race to the Edge, Season 1, before later appearing Dragons: Rise of Berk. 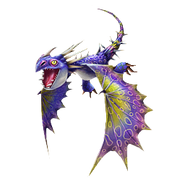 Retrieved from "https://howtotrainyourdragon.fandom.com/wiki/Edge_Nadder?oldid=406804"
Community content is available under CC-BY-SA unless otherwise noted.