The Edge Cove is a location that first appeared in Dragons: Race to the Edge before later appearing in Dragons: Rise of Berk.

However, due to the series of explosions caused by the other Dragon Riders' dragons, a pack of Scauldrons were attracted to the cove, hoping to eat Bolt & Float. However, after a lengthy chase and with the help of the Riders distracting the Scauldrons with electric eels, Bolt & Float was able to escape from Edge Cove. The Scauldrons were eventually chased off and Bolt & Float returned to his pod.

Later, Edge Cove became one of the Journey locations for Toothless. Hiccup and Toothless went to Edge Cove to find out more about the Covecharger. Here, they need to defend it either from a Scauldron or the Dragon Hunters. 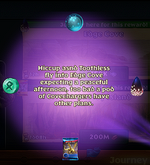