How to Train Your Dragon Wiki
Register
Don't have an account?
Sign In
Advertisement
in: Dragons, Dragon Species from the Books, A Hero's Guide to Deadly Dragons,
and 4 more

Terrifying swiveling drill, and the usual teeth and talons... 10

Really scary if they catch you... 9

Driller dragons are large-ish dragons with vicious teeth and claws like many dragon species, and large black wings. What sets them apart from other dragons, though, is their drill. They possess a single drill at the end of their noses that can turn extremely fast. The drills can get up to 6 feet in length. Driller Dragons can very easily pierce and drill wood, and can break down stone as well.

Another key feature of driller dragons are their brains. They are very tiny and very exposed, sitting between the eyes in a lump the size of a large pimple.

Driller Dragons are occasionally used by Vikings for guarding or even pulling wagons and such. Like the Sabre-Tooth Driver Dragon, the Driller Dragon ultimately sided against humans in the Dragon Rebellion.

Driller Dragons are mentioned in this reference book in the Key to Dragons table. 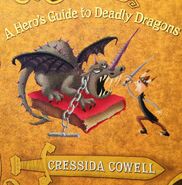 Cover of "A Hero's Guide to Deadly Dragons"