How to Train Your Dragon Wiki
Register
Don't have an account?
Sign In
Advertisement
in: Media, Mobile Apps

Dreamwork Press: Dragons is a mobile app released exclusively for Apple devices in August 2, 2014. The app works as an interactive storybook that tells your story as a viking who suffers memory loss after Hiccup rescues you from a shipwreck. It was released for $4.99 with additional downloadable books planned to be released for $0.99 each.

Welcome to Berk, where YOU are the hero of this dynamic and interactive action-adventure storybook app! Explore surprising new worlds and train your own dragon as you discover your destiny as a Viking, dragon rider, and hero.

In this captivating expansion of DreamWorks Animation’s How To Train Your Dragon universe, a shipwreck has left you stranded in the icy sea with a mysterious dragon egg and no memories of your past. With each chapter of this exciting saga, you will soar and explore alongside Hiccup and Toothless as they teach you about life on Berk—and beyond!—and help you to unlock your lost identity.

New chapter installments will keep your quest alive with fresh and exciting challenges and unique opportunities to bond with your dragon.

Book 1: Flight of the Returnwing

Your story starts in the middle of the ocean, you awake underwater, in the middle of a shipwreck, holding a heavy sack in one hand. You swim to the surface where you manage to stay afloat using a wooden splinter from the wreckage that drifts all around you. You notice that one of the wooden splinters has a mark on it, but you don't have time to get a better look as you spot a Seashocker's dorsal fin approaching you! You are saved by Hiccup and Toothless, who fires a plasma blast to the dragon scaring him away. Hiccup introduces himself and Toothless, but when they ask for your name, you realize you can't remember it. Toothless uses his sonar to check the surroundings, but you are the only one there. Suddenly, a cracking noise causes Toothless to paw at the sack you were holding, revealing a muddy dragon egg inside. Hiccup realizes the egg is cracking because it has become too cold after being underwater, and that the dragon may not hatch if they don't do something soon. He then offers to take you and the egg to Berk.

On the way to Berk Hiccup explains to you a bit about the history of dragons and vikings on Berk, and how it all changed thanks to him and Toothless. Not long after, Toothless reaches the island and lands in Gobber's forge. There, the egg is rapidly put in the furnace, which is then lit up by one of Grump's fireballs. The mud covering the egg starts to burn away and soon after the egg explodes, hatching. After the smoke has cleared, you, Hiccup and Gobber realize the furnace is empty and the baby dragon is nowhere to be seen. After Gobber points out the dragon must be on the loose, Hiccup states that it's his and your job to find it.

You follow the sounds of destruction and end up in the dragon academy. From the outside you can hear the angry yells of Astrid. Hiccup suggests to let him do the talking, since Astrid tends to throw axes when she is upset. When you enter the arena you see that the chains on top of it are covered in fire, causing them to melt and fall down. After Hiccup calls out for Astrid, she guesses that you and Hiccup are looking after a baby dragon. The baby dragon, with the help of Ruffnut and Tufnut, had managed to create a big mess in the academy. Astrid points out to the twins, who have their bottoms on fire thanks to the runaway hatchling. Hiccup asks Ruff and Tuff if they managed to get a good luck at the dragon, since you two still don't know what species it is. They haven't, but they both want to keep it, so they start a small fight about it. Soon after, you hear a loud crash and decide to go investigate with Hiccup. Astrid decides to scout the island with Stormfly looking for the dragon.

You fly with Hiccup and Toothless into the dragon hangar. Hiccup explains to you that the increasing dragon population in Berk created a space problem, so they decided to use some ancient caves underneath Berk to house the dragons. Hiccup notices the dragons seem to be riled up and it may be because of the baby dragon. You also meet Hookfang, who is sitting on top of Snotlout. After Snotlout sees you he tries to intimidate you boasting about his Thawfest winning record and other, made up, feats. You also meet with Fishlegs, who is giving a bath to Meatlug. Hiccup asks Fishlegs if he has seen the hatchling. Fishlegs replies he has, but that it was moving so fast he couldn't get a good luck. He also concludes the dragon must've gone out through the hatchling door on the other side of the hangar.

Toothless, Hiccup and you land in the cove where Toothless was stranded in the first movie. There, you finally find the baby dragon, but it quickly hides in a bush. Hiccup points out that it must be very scared, after all it is surrounded by strange people in a strange place. You claim you can relate. Toothless then reaches in the storage compartment of his saddle and takes out the "returnwing" a boomerang-like device Hiccup invented with Gobber when he was trying to make a new kind of weapon. Hiccup suggests that playing with Toothless may make the dragon trust more in humans, so he lets you throw the returnwing. The plan works and the baby dragon slowly comes out of the ferns. Hiccup notices the dragon is a baby Changewing which is why you had such a hard time finding it. Toothless encourages the baby dragon to come out, and you realize it is heading in your direction. Hiccup also tells you to reach out your arm. You do, and as the baby inches closer to your palm, you and the changewing get bonded. 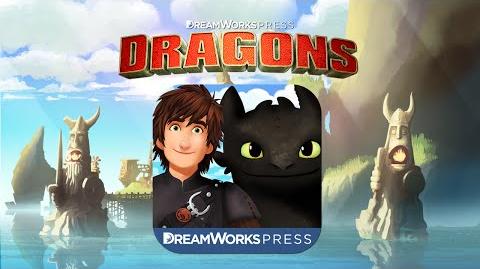