How to Train Your Dragon Wiki
Register
Don't have an account?
Sign In
Advertisement
in: Dragons, Dragon Species from the Books, Sea Dragon Class,
and 5 more

A Dreader is a Sea Dragon featured in the How to Train Your Dragon novella The Day of the Dreader.

Dreaders, like many Sea Dragons, are extremely huge. They seem to be able to come in multiple colors, at least yellow, green, and blue. (Note 'normal' Stink Dragons are depicted as only red/orange and black). On the cover of The Day of the Dreader, this dragon is depicted as being green with candy-cane colored horns on its snout.

Dreader eggs are large and described as "a beautiful lime green in colour, speckled with pale-brown freckles". Dreader babies are extremely small relative to their gargantuan adult size, and have not special features. They have four legs, two wings, and a spade tail.

There are a lot of rumors about their terrible abilities, such as being able to suck a victim's brains out. This turns out to be false, as seen in the events of the novella. In reality, other than eating you or squishing you with their large size, they can spit a vile, indescribably malodorous black sludge. This ability classifies it as a stink dragon. However there are quite a few physical differences between a commonly seen Stink Dragon and a Dreader, so it is probably a related, but distinct species.

With a Disobedience rating of "10", Dreaders are not trainable.

Dreaders took the side of Furious in the Dragon Rebellion.

The Day of the Dreader

One keeps the whole Isle of Berk 'hostage'. Every Viking and Dragon (even the Seadragonus Giganticus Maximus) are afraid of Dreaders. It turns out to be a Stink Dragon and not very scary at all.

The Dreader is featured in this reference book in the Dragon Key table at the back.

Cover for "The Day of the Dreader" 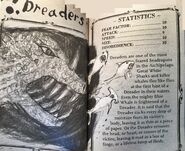