Dreadel is a Sentinel that appears in the game Dragons: Rise of Berk.

Dreadel is dark brown with beige plates coating all og his body but his wingtips, in the standard Sentinel fashion. His spines are olive green, as are his stubbed claws, whilst his eyes are red, unlike the eyes of most Sentinels, which are white owing to their blindness. This Sentinel also appears to be quite short in stature, with a stocky build and short tail. 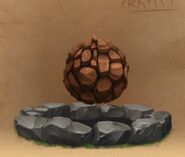 Retrieved from "https://howtotrainyourdragon.fandom.com/wiki/Dreadel?oldid=530841"
Community content is available under CC-BY-SA unless otherwise noted.