The Draugen, named after the undead creature Draugr in Norse Mythology, is a ship that appears in the Comic, "The Legend of Ragnarok".

The Draugen is described as a Viking Longship, therefore is clinker-built with wood, and appears to have only one deck. It is adorned with spiky round shields along its sides. Like most Longships, the Draugen has a single mast with a large square sail. The sail has a horned helmet silhouette on it. The mast head is adorned with the skull of an Unknown Dragon Species. The Draugen is one ship in a fleet of ships from the Outcast Tribe.

Alvin the Treacherous plans to take advantage of the wild seas around Berk, expecting Stoick to recall the Hooligan patrol ships for their own safety. Alvin and Savage ride the Draugen on the chaotic seas, despite the crew's misgivings. Alvin and some crew members disembark on smaller ships (faerings or dingies) that were most likely carried by the Draugen and others to reach land once they arrive to invade Berk. A monstrous sea creature destroys some of the smaller boats. Most likely the Draugen remained undamaged, as later on Alvin and the Outcasts leave Berk to go home. 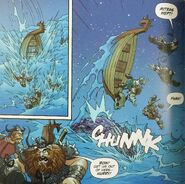 Retrieved from "https://howtotrainyourdragon.fandom.com/wiki/Draugen?oldid=383105"
Community content is available under CC-BY-SA unless otherwise noted.