How to Train Your Dragon Wiki
Register
Don't have an account?
Sign In
Advertisement
in: Plants, Fictional Species, Dragon Food,
and 2 more

Dragonvine is a plant that is poisonous to humans and deadly to dragons (except Silkspanners), introduced in the graphic novel of the same name, Dragonvine.

The Twins theorize the origins of dragonvine as resulting on weeds being fertilized by the blood and pus of a dead Titan Wing Snaptrapper. However, no concrete origin is given.

Dragonvine is a vine covered with thorns with no visible leaves or flowers. It is extremely fast-growing, literally growing before one's eyes. Its habit, like many vines (though it is much much quicker), is to wrap around things near it for support. This phenomenon almost seems targeted, however, almost carnivorous, though there has not been any indication that this plant derives nutrients from its host, as do Venus flytraps.

Dragonvine also contains fast-acting toxins either on its stems, thorns, or both. The toxins enter through the skin, making the creature that contacts it very ill or die. Humans can become violently ill at some point after exposure, while it is deadly to dragons. The length between exposure and death is unknown. The only remedy known at present is the entry point being treated by Silkspanner dragons, who are immune to its effects and eat the vine. It is unclear whether the dragons 'suck' out the poison, or their saliva may contain neutralizing components.

Dragonvine appears to either be propagated vegetatively by cuttings or by a bulb-type growth. These ball-like objects appear in Dragonvine, but it is not clear which. Eret refers to the farmers as 'harvesting' the dragonvine while looking at bulb-like structures partially planted in soil, possibly indicating they are cuttings.

In DreamWorks Dragons: Dawn of New Riders, dragonvine also appears on Blood Briar Island. It appears to be a different variety however, with thick woody stems, large orange bulbs, and a more controlled growth habit. It does not appear quite as potent as the variety found on Dragonvine Island, but still has an incredible growth rate.

Dragonvine is an exclusive food source for Silkspanners. Otherwise, due to its toxic property to both humans and dragons, it can be weaponized against both. Bayana's tribe intended to harvest dragonvine and use them as weapons to protect themselves and their newfound island, after being harassed by Drago Bludvist.

Dragonvine, in conjunction with other substances such as Dragon Root, can be rendered into a concoction that controls dragons, as seen in DreamWorks Dragons: Dawn of New Riders.

Dragonvine appears on Blood Briar Island, which the player-controlled characters - Scribbler and Patch much navigate through to find Eir Stormheart. Eir also uses a dragonvine extract to control dragons. 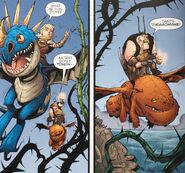