Dragon Training encompasses interacting with and teaching dragons to do specific tasks for human purposes, ranging from fighting to companionship. It is seen throughout the DreamWorks Dragons Franchise, beginning with the first movie, How to Train Your Dragon.

Dragon Training was made well-known around the Barbaric Archipelago when Hiccup Haddock trained the Night Fury, Toothless. Taking knowledge learned about dragon behavior gleaned from hundreds of years of fighting and killing them, as well as his own observations, Hiccup established the Berk Dragon Training Academy for his village, as seen in "How to Start a Dragon Academy".

However, the training of dragons in one form or another has occurred prior to this event for ages. The Wingmaidens of Wingmaiden Island have been shepherding Razorwhips for centuries, forming a relationship with female and juvenile dragons. Most notable is their use of hatchlings as a mode of aerial transport, first seen in "Snotlout's Angels". Additionally, "Defenders of the Wing, Part 2" reveals the Defenders of the Wing also formed mutually beneficial relationships and utilized the abilities of the Eruptodon, as well as Speed Stingers. The Uruz Tribe have also been training Thunderclaws for centuries, using them to pull their sleds. In addition, the Large Shadow Wing Snogglewing was accidentally trained by Vikings offering it food in order to avoid its wrath for generations.

Negative dragon training is also in evidence prior to Hiccup and Toothless' Relationship, based on forced servitude. Drago Bludvist maintained an army of dragons and trained them in warfare, in addition to manual labor and transportation. The Dragon Hunter Tribe has also used dragons not only as a commodity, but trained them to fight, Terror Mail, and labor, evidenced throughout the entire Dragons: Race to the Edge series.

Dragons: Defenders of Berk and the episode "Triple Cross" also state that the Berserker Tribe was able to capture and tame Skrills and use them as a tribal symbol and as beasts of war.

As mentioned in Dragons: Rise of Berk, some dragons simply prefer to live among Vikings even without being trained, such as the Windstriker Galesplitter.

Dragon training first and foremost is to prevent injury to the human and property when dealing with a dragon, which can be obtained through different methods. After this has been established, more advanced training can occur for the purposes of labor, war, transport, protection, companionship, courier services, demolition and construction, entertainment, and even as food and products.

For purposes here, negative dragon training technique are those using intimidation and subjugation, physical punishment, force, captivity, chemical restraint, or otherwise little consideration for the mental and physical well being of the dragon.

Intimidation and Force: All dragon species follow some level of hierarchy, even from other species. When properly executed without fear, even humans are able to intimidate a beast much larger and deadly than themselves. This approach is used by Drago Bludvist against dragons many times his size, even a Bewilderbeast. The key is to be able to render a dragon's attacks moot and move and vocalize in an aggressive manner as another dragon would. In Drago's case, his fire-proof dragon skin aided with this approach. This was demonstrated with Hookfang when the dragon blasted him with fire, but Drago remained unscathed, advanced menacingly, in essence 'roared' angrily, and shoved Hookfang's snout down to force submission. Drago also tamed a

Bewilderbeast by intimidation and subjugation of a juvenile during its formative years, so that it was conditioned to respond to him even when the beast could have easily defeated Drago. By harnessing the Bewilderbeast's power as an alpha and silent inexorable call to other dragons, he is able to control large groups of dragons to do his bidding.

"Breaking" dragons to riding, much like some horse training techniques is confining and chaining a dragon against its will, and then forcing a rider onto its back until it is 'broken' and gives in and gets used to a rider on its back. The Dragon Flyers used this tactic to train Singetails.

Physical Restraint: Most - but not all - dragons trained in a negative fashion against their free will are typically physically restrained in some manner. This includes caging when not performing a task, chains, manacles, box-type muzzles, and even bits and bridles. After breaking Singetails to their wills, the Dragon Flyers employed dragon-proof metal bridles with bits while riding them and crops for directions. Afterwards they were stabled and confined, much like horses. Cages and chains are also often the 'dragon-proof' variety.

Muzzles, fashioned to fit the various dragon species, were often some other iron alloy and leather rather than dragon-proof metal. This is most likely due to the species' particular fire-type or the fact that the muzzled dragon isn't able to open its mouth enough to produce flame to melt or burn the muzzle. Viggo Grimborn was seen both caging a Flightmare in a dragon-proof metal cage, as well as placing a leather muzzle with an aperture at the front to control the amount of paralyzing mist it could breathe out.

Chemical Restraint: Various substances can be used to drug dragons into submission, or otherwise perform how a human wants them to. Dragon Root, alone or in combination with other ingredients, have been used to sedate dragons, weaken them, but also enrage them tactically. The Dragon Hunters frequently use arrows tipped with dragon root reduction to bring down dragons. Eir Stormheart in Dreamworks Dragons: Dawn of New Riders uses a cocktail of dragonvine, Dragon root, and other ingredients to in essence 'mind control' dragons to her bidding. This is incrementally delivered to the dragon over time by attaching a container of it directly to the dragon. The Dragonroot Company in Dragons: Titan Uprising also use a cocktail including dragon root and Buffalord saliva to strategically anger dragons beyond reason to wreak havoc in specific locations. Although dragon root-tipped arrows have no effects on Bewilderbeasts, this proprietary blend from the Dragonroot Company does.

Nikora Stormheart in School of Dragons was able to extract Grimora toxin and vaporize it. She was able to deploy this against dragons to make them violent and crazed. Though she was not able to control these dragon directly, she was able to point them in the direction of her adversaries to fight.

The Dragon poacher Grimmel the Grisly utilizes the paralyzing venom of the Deathgripper in specific quantities to also 'mind control' dragons and make them docile and open to his orders. He creates harnesses that directly inject the venom into the head or neck of the dragons, even Deathgrippers themselves.

For purposes here, positive dragon training techniques involve those which work with a dragon's natural inclinations, positive reinforcement, human-dragon bonding, allowing free will and choices, or other methods that take into account the well being of the dragon and the needs of both parties.

Establishing a Connection: Holding your hand out, then wait for the Dragon to come to you. If it touches you, you have a bond..

Mood Enhancers: Dragon Nip (alters behavior of dragons so that they are calmer and happier), Sagefruit (calms a dragon down and suppresses extreme feelings)

Skrills: Skrills are notoriously aggressive and difficult to deal with. Despite that, members of the Berserker Tribe were able to lure them into confinement, in the Tribe's history. The very first step in taming an adult Skrill is to calm it down and get its attention so a physical connection can be made. The Berserker Tribe was aware that Skrills were attracted to metal objects with electrical conduction properties. Simply waving a metal object like a dagger or a sword slowly in front of a Skrill seems to calm and perhaps mesmerize it enough to get close.

Whispering Deaths: Whispering Deaths are one of the hardest dragons to train, as they are extremely wild and aggressive, especially to those that enter their tunnels. However, they rather enjoy having their teeth brushed, as they cannot do it by themselves. If one can get close enough to a Whispering Death to brush its teeth, the dragon will calm and allow the person to touch it.

Scauldrons: Scauldrons spend most of their lives underwater, and on the rare occasions they surface, they can quickly become homesick. Covering oneself in ocean water or fish oil will calm down a Scauldron enough to be able to get close to it and make it comfortable in the presence of humans. 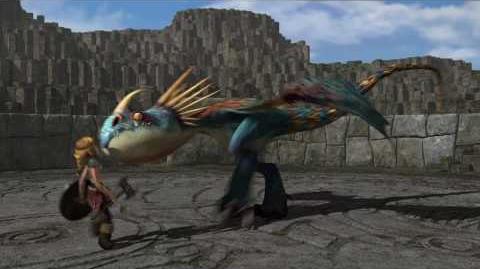 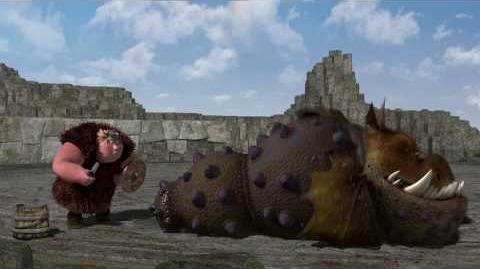 DreamWorks' "How To Train Your Dragon" - Dragon Training Lesson 2 The Gronckle
Lesson 2: The Gronckle 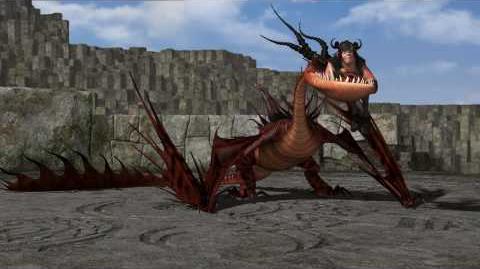 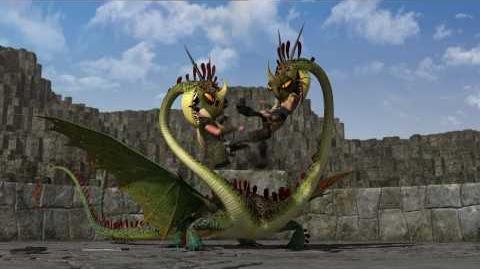 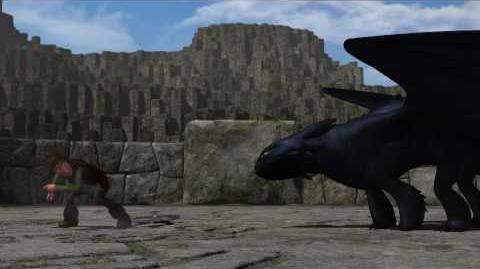 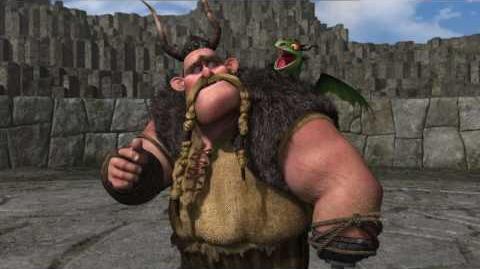 Retrieved from "https://howtotrainyourdragon.fandom.com/wiki/Dragon_Training_(Franchise)?oldid=664022"
Community content is available under CC-BY-SA unless otherwise noted.