Isle of Berk
School of Dragons

Dragon Nip is a plant first introduced in the first film, How to Train Your Dragon and has made many other appearances in the franchise.

Dragon Nip is a green grassy plant, which grows to approximately half the height of a full-grown Viking (which is the height of Hiccup). It is described as having a garlicky smell. In the game, School of Dragons, it grows in short grass-like bunches in the player's garden. In the Franchise, it is portrayed both as growing wild and cultivated. It appears to prefer sunlight.

In the game, School of Dragons, Dragon Nip is described as growing into "garlic grass". The term "Garlic Grass" is rather generic, but may refer to any number of species in the Allium genus. One in particular, Allium ursinum, is native to Europe and has broader - but still relatively thin - leaves than other species, which mimics how Dragon Nip is portrayed in School of Dragons.

It also looks similar to "Catnip", which is another plant fed to cats and is often the young shoots of oat plants.

Dragon Nip alters Dragon behavior, paralleling Cat Nip in real life. It affects different dragons differently, ranging from no reaction, to relaxation, to playfulness, to aggression (very much like the variable influence in cats). Depending on the Dragon species' reaction, Dragon Nip has been employed in Dragon training quite successfully. In School of Dragons, Dragon Nip is used for medicinal purposes in a few Farm jobs the player can complete.

When Night Furies and Gronckles have dragon nip rubbed on the tip of their nose and around their face, their pupils dilate, they stop flying or attacking and they begin to rub the dragon nip over their bodies, rolling in it if possible, and playing around in it or with it. This can also result in sleepiness and apparent dizziness, bringing the dragons pleasure and comfort. One of the most effective known ways of taming a Gronckle is to rub a bit of Dragon Nip on its nose, then scratch and tickle it until it bonds with the tamer. Whispering Deaths, however, appear to immune to the effects of Dragon Nip.

Dragon Nip can also simply be eaten by dragons, as evidenced in a Farm Job mentioning Arctic Poppy, along with Dragon Nip and Yak milk combined into a delicious stew for dragons.

It has been implied that there is a mind or mood-altering effect when dragon nip is eaten by humans.

Dragon Nip first appears during the time Toothless and Hiccup spend together. During a flight practice, the two are blown away and land into a spot full of grass, that has a calming effect on Toothless. Hiccup takes some of the grass, and uses it several times during Dragon Training on Meatlug the Gronckle, which is also how he won the Training.

Dragon Nip is briefly mentioned in the part about Gronckles, where Hiccup claims that a Gronckle won't stay mad at you if you feed it a little Dragon Nip. Some of the images from the How to Train Your Dragon film are recapped in this Movie Short.

In the episode "What Flies Beneath", Hiccup attempted to use dragon nip to tame an attacking Whispering Death, but sniffing it only made the dragon sneeze. Astrid is implied to have eaten dragon nip once, and it is also implied to have had some effect on humans as well.

In the episode “Bing! Bam! Boom!”, Fishlegs feed three adolescent Thunderdrums Dragon Nip to calm them them down.

Players are given a farm to raise livestock and also crops, to harvest and complete Farm Jobs (quests). One crop is Dragon Nip, and is the cheapest crop a player can buy. It takes 2 minutes to grow in the game.

Arctic Gentian, Dragon Nip, and Toothache Plant is required to complete a Farm Job concoction to ease pain after Gobber pulls a tooth from Barf and Belch.

Another Farm Job asks for Arctic Willow, Dragon Nip, and Squash to mix as a calming agent for dragons.

A possible medicinal use is mentioned in another Farm Job as well, when the player is asked for corn, truffles, and Dragon Nip to make a "specially formulated treat to keep a dragon's wings healthy."

Objects to decorate the player Hideout also includes a broom whose bristles are made of Dragon Nip.

Dragon Nip appears as one of the different foods that can be fed to the player's dragons. 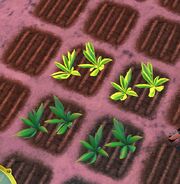 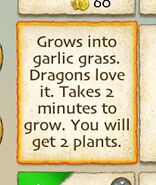 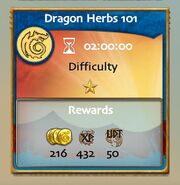 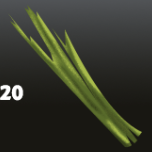 Retrieved from "https://howtotrainyourdragon.fandom.com/wiki/Dragon_Nip_(Franchise)?oldid=596684"
Community content is available under CC-BY-SA unless otherwise noted.