"Dragon Eye of the Beholder, Part 1"

The Dragon Hunter ships, were ships that were unlike the smaller ships from the Hooligans, Outcasts or the Berserkers that the Riders had earlier faced. These ships were massive. They were brigantines, with 3 large sails, and they were fast. These ships were equipped with Dragon-proof chains, catapults, Dragon Root Arrow ballistas, and many other powerful weapons. When the Riders went up against a large group of these ships, they had to retreat because of the strength of these ships. Inside the ship, there were also a great number of booby traps.

They were designed by Viggo Grimborn, and the way he built them was genius. The cages in which the dragons were held could only be reached by one, heavily guarded entrance. That meant that if the Dragon Riders were to attack, if they had brought the trapped dragons below deck, it would be nearly impossible for the Riders to free them. These ships were made of great oak trees, so the ships wouldn't be destroyed by one shot by a Night Fury or Deadly Nadder. The other ships created by the Outcasts and Berserkers were easily overcome by the Riders, because they were small, made of weak wood, and had a very small amount of weaponry. 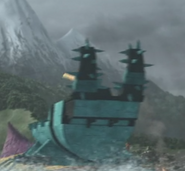 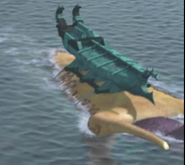 In "Between a Rock and a Hard Place"

In "Defenders of the Wing, Part 1"

Retrieved from "https://howtotrainyourdragon.fandom.com/wiki/Dragon_Hunter_Ships?oldid=412634"
Community content is available under CC-BY-SA unless otherwise noted.