Dragon Grooming Stations first appeared in the second movie, How to Train Your Dragon 2, and then in the game, Dragons: Rise of Berk. It also appears in the book, DreamWorks Dragons: To Berk and Beyond!.

The Dragon Grooming Station is a domed, open-sided hut containing a pool of water and a rotating rock wheel. The roof is depicted as shingled with green tiles. In the game, Dragons: Rise of Berk however, there is no pool of water, and there appears to be hot coals or fires underneath the roof.

The Dragon Grooming Station is a hut for dragons to care of themselves, and in which their riders can groom them. They can bathe, exfoliate, and possibly dry off over hot coals. 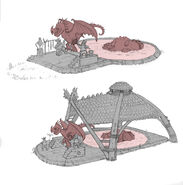 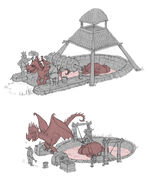 Bathing Station seen to the side in "Have Dragon Will Travel, Part 1"

In To Berk and Beyond