How to Train Your Dragon]]'

Various Dragon Gear appears in the How to Train Your Dragon.

Dragon gear are specialized equipment utilized in the training and husbandry of dragons, particularly Hunting dragons. They range from equipment for transport to articles of protection for the dragon handler.

Dragon-keeping requires specialized equipment, several of which are described in the Book series.

A special basket is needed to carry a hibernating hunting dragon. 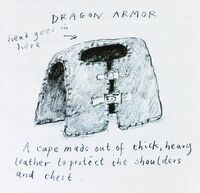 Hunting Dragons often perch on the shoulders of their masters. As such, the Viking's shoulders and chest are vulnerable to a dragon's sharp talons. Thick leather 'dragon armor' is used to protect those areas.

There are many examples through the Book series of Vikings not wearing dragon armor, so it might be assumed that dragon armor is typically only needed during the active training of a dragon.

The dragon glove is a special thick glove presumably of leather that covers the Viking's hands and arms from a hunting dragon's talons. It bears direct resemblance and use to the [Falconry training and technique Glove] or Gauntlet used in real-world falconry.

Presumably, Vikings eventually do not need to continue to wear these gloves for a well-trained dragon, and only used while actively training.

Retrieved from "https://howtotrainyourdragon.fandom.com/wiki/Dragon_Gear?oldid=372872"
Community content is available under CC-BY-SA unless otherwise noted.