DreamWorks Dragons: To Berk and Beyond!

Dragon Feeding Stations first appeared in the second movie, How to Train Your Dragon 2. Another was seen in the very first episode of Dragons: Race to the Edge.

The Feeding Station seen in How to Train Your Dragon 2 appears to be a reservoir of fish overhanging a stone basin, into which fish are released for dragons to eat when they please. There also appears to be copper side bowls to the station; it is unknown what they are for.

The top of a feeding station appears in "Dragon Eye of the Beholder". This iteration appears to be a large bowl of fish, raised to the level of Viking hut rooftops. The bowl is large enough to see a Deadly Nadder fully immersed in fish. However, side bowls can just be made out on a lower level, possibly similar to the copper side bowls of the feeding station seen in the second movie.

A primitive version was actually seen in How to Train Your Dragon at the end. It was merely a large raised bowl of fish at that time.

The Dragon Feeding Station is a building for dragons to feed themselves, thereby avoiding any conflicts between villager and dragon by providing an alternate food source to the Vikings' food stores.

In DreamWorks Dragons: To Berk and Beyond! 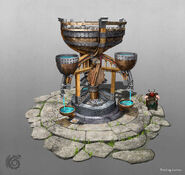 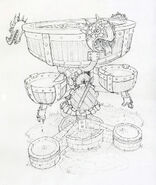 Retrieved from "https://howtotrainyourdragon.fandom.com/wiki/Dragon_Feeding_Station?oldid=423181"
Community content is available under CC-BY-SA unless otherwise noted.