How to Train Your Dragon Wiki
Register
Don't have an account?
Sign In
Advertisement
in: Objects, Franchise Objects, School of Dragons,
and 2 more

During "Return to Dragon Island", Eret tells the player about a device that can mimic dragon calls and sounds. He says that while one of his friends were bringing it to him, the Dragon Hunters attacked and took the object into their possession. Eret then asks the player to help him get it back, telling him/her that it should be the time to also get back Berk's gold that was lost to Viggo. They then go to a Hunter base.

The player manages to retrieve both the Dragon Cry and the money and returns to Eret's boat. However, the Dragon Hunters surrender them and demand the goods back. Eret then activates the Dragon Cry that makes the sound of a Night Fury, scaring the Hunters.

After returning to Berk, the player gives the device to Hiccup, who is eager to study it, just like he did with the Dragon Eye.

At the beginning of the "Secret of the Leviathan" expansion, the Twins use the Dragon Cry in the Great Hall, as part of one of their pranks. However, that results into the baby Luminous Krayfin flying away.

In Dragonvine, Fishlegs apparently carries it with him, as he consults it after being attacked by Silkspanner dragons. Not able to find the right sound in the field, he takes it back to Berk to consult Skulder the Archaeologist. With more research, they are able to determine that the Silkspanners eat dragonvine, a plant poisonous to humans and deadly to dragons. 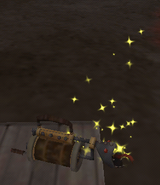 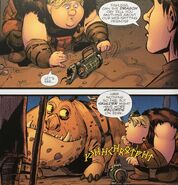