Dragons are the Barbaric Archipelago's (perhaps even Earth's) second dominant species, a race of powerful reptiles with two distinguishing characteristics: flight and fire generation, although not all dragons have both or either. A lot of dragons can be tamed and have human companions.

They are the main characters in the How to Train Your Dragon books.

Most dragons are four legged with a pair of wings and firebreathers. The fire from a dragon comes from two particularly small, almost undetectable holes in a dragon's throat. From these holes, "A dragon's breath, even when it exhales, is composed almost entirely of pure oxygen. It is this that makes it so very flammable." A dragon may choose not to ignite its breath, and due to its oxygen rich nature, it can be inhaled by a human. This can be useful for the human if they are underwater.

Dragons are also capable of living underwater as they have gills behind their horns that allow them to suck the oxygen in the water. Most dragons live on land, though. Their size and coloration varies depending on the species. The smallest dragons are the bug sized Nanodragons with the biggest being the Seadragonus Giganticus Maximus. A dragon's gaze is said to be hypnotic, a staring contest with Toothless once made Hiccup very dizzy, and Toothless was just a baby. Their eyes also shine in the dark.

"The eyes of dragons shine in the dark," for those species that have fully-developed eyes. At night they can act as bright spotlights for humans. This ability is mentioned of Toothless inHow to Be A Pirate when they sink into the murky depths of the sea. One Eye's one eye also shines in the dark and is of particular use in How to Cheat a Dragon's Curse as he pulls a sleigh at night across sea ice.

Dragons have a particular odor as well as described in Book 1 - "the stench of dragon - a salty stink of seaweed and old mackerel heads".

Dragons start out as an egg, and after hatching they grow. Some hatch, grow to enormous proportions in their prime, then start shrinking again to juvenile size until death. This growth pattern is seen in the Seadragonus Giganticus Maximus. Others are able to remain in their eggs for hundreds of years until the right conditions are met in the environment to hatch.

Stress and captivity has a physical impact on dragons, just as it does most creatures. They may loose weight and their tail gets particularly floppy. 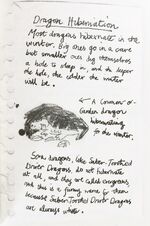 Separate from the sleep coma ability but most likely connected in some way is hibernation. A large number of dragon species go in to Hibernation during the Winter. A few species do not, such as the Sabre-Tooth Driver Dragon, and because of this are sometimes referred to as 'Evergreens'. Dragon hibernation involves burying themselves deep into the earth or congregating in caves. How deep a Dragon digs for a burrow can give an indication of how cold of a Winter is coming. If a dragon does not dig a deep enough hole and becomes too cold, it may sleep through Spring and even for centuries.

A dragon's diet consists mostly of meat, but they are supposed to eat plenty of vegetables and, weirdly, lots of wood, like small branches, twigs, and the bark of trees. This helps them with their fire breathing. A dragon that can't breathe fire gets very sick and eventually explodes.

Dragons are able to go into a suspended state for hundreds of years. The Dragons may appear dead. There may be no detectable breath or pulse, and feel cold to the touch.

All dragons can mesmerize humans and prey from their gaze alone (the species that have eyes). However, they must be looked at directly in the eyes, and keeping your gaze diverted from them can reduce the hypnotic potential.

Dragons' intelligence greatly varies by the species. Some dragons like the Monstrous Strangulator are shown to be stupid enough to be easily tricked into killing themselves, while others like the Seadragonus Giganticus Maximus are proud, intelligent creatures who love riddles and have been known to speak philosophically about abstract concepts like death.

Most dragons "are only fairly fireproof", but to a much greater extent than humans are. Vikings may wear dragon skin clothing as a protection against flames. Some species are completely fireproof and can live in lava. Despite many species not being fully fireproof, many still enjoy playing in flames for a time.

According to How to Be a Pirate, dragons are able to find metal - specifically precious metals, even buried underground.

Beside the obvious death and dismemberment possible from a bite of a large enough dragon, bite from tiny nanodragons can cause a sting, possibly similar to the sting of a bee.

Dragons have a few weaknesses. For one, they can be outsmarted by humans like Hiccup. Hiccup has done this many times, like with the Green Death and the Monstrous Strangulator. Many dragons can be controlled just by having a human yell at them. The biggest weakness perhaps is possibly the Dragon Jewel. The Dragon Jewel has the power to extinguish all dragons from the face of the earth, as inside the jewel, two dragons are present, one of which is suffering from a extremely deadly disease.

In Book 1, Hiccup relates that "Dragons have a tendency to asthma" due to their fire-breathing and smoke generation. He uses this weakness to his advantage when he feather bombs the colossal Green Death and Purple Death.

Dragons in the books are described as being very sneaky selfish creatures who are never thankful for anything and will only obey under brute force and yelling. Most dragons pride themselves on this fact and will easily abandon their masters as soon as danger is on sight. Most dragons have a proud nature, often referring to themselves as aristocrats and green-blooded. Like cats, dragons have a cruel streak, and they like to play with their food before they kill it. This selfish survival code is known as Dragon Law amongst the dragons.

Toothless further iterates this point while he is harboring concerns about Hiccup's fate with the Green Death.

Toothless finally decides to help his Master, despite going against Dragon Law. This shows that proper treatment of dragons - treating them as friends - can encourage loyal, friendly, and selfless behavior in dragons.

In Berk, many of them live as babies in the dragon nursery, a cave where they hibernate together. While hibernating a dragon enters into a very deep coma. Some dragons, however, don't hibernate and they are called 'evergreen' dragons. Dragons have three eyelids which they can open at will when sleeping. Only when all three are open the dragon is fully awake.

Dragons communicate with each other in a language known as Dragonese. This language is specially hard for humans to speak since humans don't have forked tongues. Dragonese is punctuated by shrill shrieks and popping noises, and sounds. The word "pishyou", when spoken by a human, for example, is pronounced very much like a sneeze.

They also love to play in fire since their skin is fairly fireproof, and some species are even completely immune to it.

As many animals do in the face of a threat, dragons may puff themselves up to appear larger.

Rainy weather, especially when dragons are caught out in it, make them sleepy. They will spread their wings overtop their heads and bodies as an umbrella, because their skin is waterproof. This came in handy for the caged dragons out in the elements at Fort Sinister in Book 3.

Dragons also have a conscious understanding that their fire breath can cause much damage to their environment, and the repercussions thereof.

However, some dragons may decide to intentionally set fire to the landscape, as seen by the Exterminator dragons. They burned large portions of the Isle of Berk for pleasure and frustration at being sealed in their eggs for so long on Lave-Lout Island.

Dragons serve a variety of functions for humans in the Book series, most notably as 'Hunting Dragons' and 'Riding Dragons'. For Vikings of the Barbaric Archipelago, they replace dogs and horses in function. Romans also capture dragons to eat and to make objects such as shoes.

Retrieved from "https://howtotrainyourdragon.fandom.com/wiki/Dragon_(Books)?oldid=372028"
Community content is available under CC-BY-SA unless otherwise noted.