Wilderness on School of Dragons Island

The Dragon's Maw is a specific cave named in the game, School of Dragons.

In the game, Dragon's Maw doesn't look like much at all, and is merely a lighted hole in the cliff face like the others in the Wilderness area on School of Dragons Island. The player is probably to imagine something more extensive from its name.

The Dragon's Maw is named in the Quest "Missing Viking". The player is to ride their shortwing stage dragon across the wilderness by gliding to the landing pads in the middle of the area, then glide to the Dragon's Maw cave. A Viking - which turns out to be Gobber - is trapped inside, as the entrance is covered by rocks and trees.

The Dragon's Maw is mentioned again in the Quest "Saddle Up Viking", when Hiccup asks the player to "Fly up to the highest peak above the Dragon's Maw in the Wilderness" to test out a new saddle. 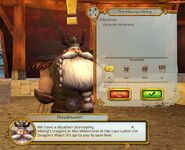 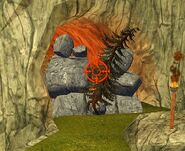 Retrieved from "https://howtotrainyourdragon.fandom.com/wiki/Dragon%27s_Maw?oldid=512260"
Community content is available under CC-BY-SA unless otherwise noted.