How to Train Your Dragon Wiki
Register
Don't have an account?
Sign In
Advertisement
in: School of Dragons, Objects, Franchise Objects

The Dragon's Edge Wall is a rock wall built on Dragon's Edge in order to defend the base against projectiles from the Dragon Hunters.

After digging a pitfall trap and rescuing a Helpful Prickleboggle from a Hunter cage, Fishlegs Ingerman decided to build a rock wall around the base, similar to the nest defense of a Catastrophic Quaken, in order to add further protection from the Dragon Hunters. After the player helped him collect enough boulders, the wall was constructed around the base, blocking all projectiles that could come from Hunter ships on the sea. Fishlegs decided that the best way to test the wall would be to get the help of a Quaken. In order to do this, the player and the Helpful Prickleboggle led a Quaken to the Edge, who proceeded to curl up and roll into the wall. The wall stood up to the Quaken's test, leaving Fishlegs to believe that it was ready for conflict.

Later, during a Hunter attack on the Edge, the wall was successfully able to block the dragon root arrows and other projectiles launched by the Dragon Hunter ships in the nearby sea. The wall held strong until the end of the attack.

The Dragon's Edge Wall is a massive rock wall that stretches around the base on Dragon's Edge. The wall is sturdy enough to withstand both the impact of a Catastrophic Quaken and the dragon root arrows and other projectiles launched by the Dragon Hunters. 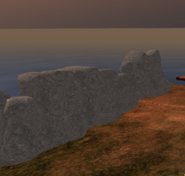