Douglas Sloan is one of the showrunners for DreamWorks Dragons: The Series on Cartoon Network and for Dragons: Race to the Edge on Netflix.

Douglas Sloan began working in film and animation in the 1990's. He has been an actor, voice actor, director, writer, and most notably, a producer.

He was nominated for a Daytime Emmy in 2016 for his work on Dragons: Race to the Edge. In 2008 he was a winner for both the Humanitas Prize and the WGA Award.

Douglas had also written a book called The Siren Chronicles which he is hoping to turn into an animated series in the future.

After completing DreamWorks Dragons, Doug signed up for a new animated series based on author Will McIntosh’s new sci-fi adventure Watchdog, where he and Art Brown will serve as showrunners.[1] 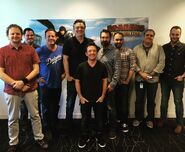 Douglas Sloan with Art Brown, David Faustino, John Tellegen, Will Moray, F.M. De Marco and the rest of the RTTE crew.
Add a photo to this gallery

Retrieved from "https://howtotrainyourdragon.fandom.com/wiki/Douglas_Sloan?oldid=333840"
Community content is available under CC-BY-SA unless otherwise noted.