Always as black as your darkest nightmare.

Terrible jaws and fangs. Also have unusual frozen fire breath, with blue flames that kill by FREEZING you . . . 30

Doomfangs are very large Sea Dragons introduced in How to Cheat a Dragon's Curse.

Doomfangs are a very large, long-necked, glossy black Sea Dragon, with two huge bright green eyes. Their size is described to be "the size of an underwater mountain", and can reach both sides of the Wrath of Thor when their wings are stretched out. And adult Doomfang is also noted to be so large, it cannot fit into the entrance to Hysteria Harbor. The eyes can be as large as a Viking sleigh seen in the series, which is large enough to seat multiple people and be pulled by dragons.

Doomfangs can also have multiple heads, according to the Key to Dragons in The Incomplete Book of Dragons. Their forked tongue can reach up to 100 meters, and is quite dexterous and colored pink.

In the epilogue of How to Cheat a Dragon's Curse, the Doomfang is described as being very large and agile. It has wings (though its not clear if Doomfangs can fly with them) and legs, though how many pair is also not specified.

Doomfangs are unusual amongst the dragons seen in the Books because of their fire. It is blue and freezes on impact. It is specifically referred to as a "cold fire" or a "blue flame", rather than simply ice.

One informational panel (back of Book 4, US version) indicates Doomfangs have the ability to hypnotize.

The Doomfang's extremely long, flexible tongue is able to shoot out of its mouth and grab small objects with accuracy.

The reader learns in How to Cheat a Dragon's Curse that Doomfangs are susceptible to Vorpentitis, just as nearly every other creature is. Possibly due to its millenia long lifespan, they can potentially suffer with it for years before succumbing to death.

Doomfangs are considered to be the loners of the Open Ocean and are rarely encountered by humans. The only known Doomfang lived in the Wrath of Thor (a strait between Villainy and Hysteria) for nearly fifteen years before moving back to the Open Ocean.

Doomfangs kept to themselves and remained unaligned in the Dragon Rebellion.

Before the events of the book series, the Doomfang lived in the Wrath of Thor. When Norbert the Nutjob's father, the Chief of the Hysterics, returned from a trip to America, he was killed by the dragon. Norbert the Nutjob swore to take revenge on it using the arrow found sticking out of the potato his father had found.

Years Hiccup and Camicazi steal the same potato from Norbert the Nutjob (the current Hysteric Chief) to cure Fishlegs of Vorpentitis, a sickness caused by the Venomous Vorpent sting that is otherwise incurable. While making their way back to Berk after the ice had thawed, the Doomfang breaks through the ice and attacks the two for the potato because the Doomfang itself was suffering from Vorpentitis. It even leaves the Wrath of Thor while chasing after them and eventually does succeed in eating the potato, leaving Hiccup without a way to save his friend's life. Despite swearing revenge on Hiccup for embarrassing him earlier in the book, Norbert the Nutjob allowed Hiccup and Camicazi to escape for having gotten rid of the Doomfang for the Hysterics.

In the epilogue of the book, a much older Hiccup says that the same Doomfang that stole his potato followed him around like a guardian angel every time he went sailing. All the other ships sunk while Hiccup's ship stayed afloat.

The Doomfang is discussed in the Sea Dragon chapter of this reference book. They also appear in the Dragon Key table at the back of the book. 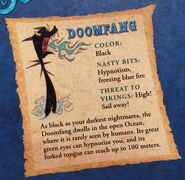 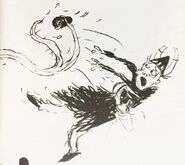 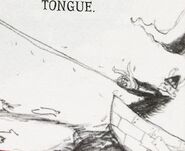 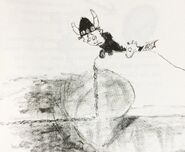 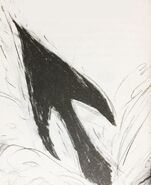 Eye
Add a photo to this gallery

Retrieved from "https://howtotrainyourdragon.fandom.com/wiki/Doomfang?oldid=706627"
Community content is available under CC-BY-SA unless otherwise noted.