Dolphins are marine mammals that are mentioned in the game, School of Dragons.

Dolphins (Delphinus) are mammals fully dependent on a water environment. They roughly resemble Fish, and were historically thought to be a fish. However, dolphins must breathe air from a nostril - called a blow hole - at the top of their heads. Dolphins belong to the mammal order, Artiodactyla, which are mostly even-toed ungulates, which are land animals, except cetaceans including dolphins, which are fully aquatic mammals. Cetaceans evolved from land mammals, but they gradually became aquatic.

The term "dolphin" is actually a somewhat loose common term applied to smaller to mid-size cetaceans. Porpoises are smaller and generally have shorter beaks, whereas whales are much larger. The one mention of dolphins says "Fishlegs wants to follow a dolphin shoal migration". This term "shoal" is used incorrectly here, as shoaling specifically refers to fish grouping behavior, not marine mammals. A group of dolphins is called a pod.

In fact, the Orca or Killer Whale, despite its name, is actually a type of dolphin, which belongs to the family, delphinidae, which includes other marine dolphins. Despite that orcas are dolphins, they prey on other dolphins.

Dolphins don’t really have a function currently in the Franchise.

In actuality, dolphins have been hunted for their meat and blubber throughout history and into the present day. It’s possible Vikings may have taken advantage of beached dolphins or herded them into shallow water to butcher if the opportunity presented itself. Presently, dolphins are also kept in public aquariums and zoos for entertainment.

The player can send their non-active dragons on quests - called Stable Quests - for a chance at receiving rewards. One stable quest called "Faster and Slicker", asks the player to send "A fast aquatic dragon" out to study a "dolphin shoal migration" with Fishlegs.

During the Battle for the Edge expansion pack, Astrid mentions dolphins while describing animal behavior.

On Hiccup's interactive map, there is a drawing of a dolphin jumping out of the water.

The Tidal Class dragon, Seashocker was inspired by many sea creatures, including dolphins. 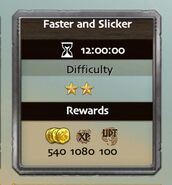