Dolphins are mammals mentioned briefly in the How to Train Your Dragon Book series.

Dolphins are water-dwelling mammals that are mid-size cetaceans - usually between the sizes of porpoises and that of whales. There is not a taxonomic group for dolphins, rather it is a non-scientific designation. There are a number of Families that are considered 'dolphins', including Delphinidae or Oceanic dolphins, Platanistidae or Indian river dolphins, Iniidae or New World river dolphins, and Pontoporiidae (the brackish dolphins).

All species called dolphins are strict water dwellers and can die if removed from water for long periods of time. They are, however, dependent on breathing air, and have a blowhole on the tops of their heads. Like all toothed cetaceans, dolphins possess a 'melon', and organ in their heads that sends out sound. The sound waves bounce off objects and head back toward the dolphin. This is a type of echolocation.

Killer Whales are mentioned in the Book series as well. They are mentioned on the Whale page, to avoid confusion. They are, however, actually Dolphins, and belong to the Family Delphinidae.

In the Book series, Dolphins are a background creature. In reality, dolphins are eaten by humans, as well as kept in public aquariums for performance.

Dolphins are seen in this Children's book while Hiccup steers a Viking ship home after a big storm at sea.

Dolphins are mentioned when the Viking novices climb up to the Highest Point on the Isle of Berk to view the Seadragonus Giganticus Maximus dragons that had washed up on Berk's shores.

Dolphins are mentioned as a subject of artwork on some of the pieces of Grimbeard's lost treasure under Berk in the Caliban Caves.

The dolphins' bones mentioned in Book 1 located at the Highest Point are mentioned again in Book 3.

In the Epilogue of Book 4, an older Hiccup recounts his experience reuniting with the Doomfang he encountered during the plot of Book 4. This enormous dragon played with his ship, which, Hiccup notes, is "common enough behavior in dolphins, and even in humpback whales, who are fascinated by boats". Doomfangs typically ignore humans. 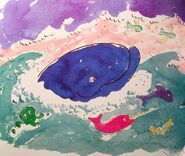 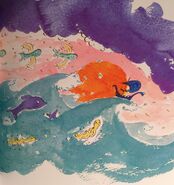 Retrieved from "https://howtotrainyourdragon.fandom.com/wiki/Dolphin_(Books)?oldid=672248"
Community content is available under CC-BY-SA unless otherwise noted.