How to Train Your Dragon Wiki
Register
Don't have an account?
Sign In
Advertisement
in: Characters, Humans, Human Characters from the Books,
and 15 more

Dogsbreath, along with the other Hairy Hooligan Novices, enter the Dragon Nursery to obtain a Hunting dragon as the first part of the Dragon Initiation Program. While in the cave, he and Wartihog fight over a large Gronckle at the risk of waking up thousands of sleeping dragons. He won and this Gronckle became known as Seaslug.

Dogsbreath, along with all the other initiates of the Hairy Hooligan Tribe and Meathead Tribe were exiled for failing the Final Initiation Test on Thor'sday Thursday. A violent storm washes several Seadragonus Giganticus Maximus ashore on the Isle of Berk. Dogsbreath and the other initiates carry out a plan Hiccup concocted to pit the Green Death against the Purple Death by dropping feather bombs on the dragons and hurling insults at them. Ultimately, the two dragons kill each other, but not before the Green Death seeks revenge on Hiccup. The Dragon grabs a fleeing Dogsbreath to see if he is Hiccup, then throws him aside when he sees Dogsbreath is not him.

Dogsbreath is listed as a student in the Pirate Training Program in How to Be a Pirate, meaning he participates in lessons such as 'Swordfighting at Sea (Beginners Only)'.

While on a boat at the beginning of the book with the rest of the Hooligan novices, the novices learn 'Swordfighting at Sea (Beginners Only)'. Dogsbreath is nominated to spar with another novice. Oddly, Hiccup volunteers, much to Fishleg's dismay. Dogsbreath beats him thoroughly, egged on by Snotlout on the sly. He gets so angered that he is beyond reason and tries to kill Hiccup. The coffin of Grimbeard the Ghastly crashing into their boat is the only thing that saves Hiccup from both Dogsbreath and drowning.

As a Pirate Training Program student, Dogsbreath built a small ship named the Sparrowhawk in 'Shipbuilding' lessons, along with his partner, Snotlout. They then participate in 'Board-an-Enemy-Ship' lesson on the Sea-Known-As-Woden's-Bathtub, along with the other novices. They are to board a Peaceable fishing boat, menace them, and take a helmet as a trophy. Before going after a fishing boat, Dogsbreath and Snotlout make sure to 'accidentally' ram Hiccup's and Fishlegs' boat, The Hopeful Puffin, damaging it and knocking it off course into the fog.

Later, while waiting for Gobber to appear in the Great Hall for a 'Frightening Foreigners' lesson, Snotlout, Dogsbreath, and Fireworm harass Fishlegs.

At the beginning of the book, the Hooligans are searching for Camicazi in the Eastern Archipelago. Snoutlout is telling ghost stories to him and Fishlegs, which terrifies both of them.

Dogsbreath is very tall, as tall as his father, according to Book 1. He is also described as "a great, big gorilla of a boy." Images of him show a nose ring and a helmet with two horn curving from the side and one coming up from the top.

Book 2 describes him further as "a mindless thug of a boy with hairy knuckles that practically grazed the ground as he walked, and mean little eyes and a big ring in his flared nostrils made him look like a bristly boar with a bad character."

Book 3 describes Dogsbreath similarly as the previous two books - "a great, hairy bully of a boy with a ring through his nose".

Dogsbreath is a brutish boy who played the role of being really tough and going along with Snotlout before his death. Together, these two were trouble, and they were always bullying the rest of the tribe. He is not especially intelligent, and usually went along with whatever Snotlout said, and sniggering oafishly. Sometimes he laughed so hard that snot comes snorting out his nose.

According to Book 2, Dogsbreath loves the "thought of spilling blood".

According to Book 1, Dogsbreath can "do amusing things like farting to the tune of the Berk national anthem."

In Book 2, Dogsbreath is revealed to be able to "row as hard as anybody else with one hand, while picking his nose with the other."

In Book 4, it is mentioned that Dogsbreath has the ability to shatter glass with a single, loud burp. 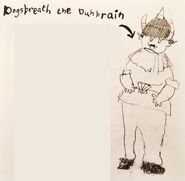 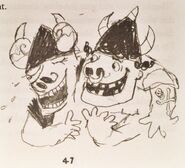 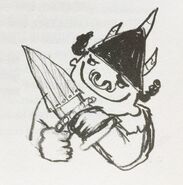 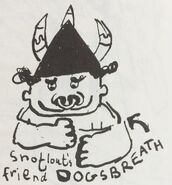 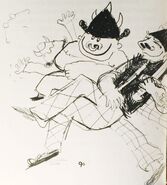 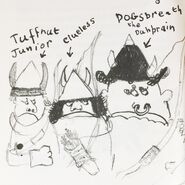