During the events of the episode "Dire Straits"

The Diving Bell is a contraption built by Hiccup that was originally made for getting underwater to free Shipsbane the Submaripper from the Straits of Baldur in "Dire Straits".

In "Dire Straits", Hiccup got the inspiration to create the diving bell from Tuffnut and Ruffnut goofing off with a smaller cauldron on Ruff's head. He built it from Gobber's old smelting cauldron by flipping it upside down and had it reinforced with Gronckle Iron and Death Song amber. He also attached legs to elevate it off the bottom, if ever Hiccup planned to swim out and not get stuck inside the circular orb. He then used it to dive to the sea floor to free the trapped Submaripper by using Changewing acid to melt the chains. It took a few tries to get it air tight, however, as the amber cracked under the water pressure, nearly drowning Hiccup. Once it was safe, he used it as an area to take a breath while swimming back and forth from the Submaripper, and melting its chains. When the dragon was riled up by Viggo's catapulted boulders, it suddenly knocked the diving bell, breaking its legs. A boulder then hit the ship's pulley system that was raising it to the surface, sending it back to the ocean floor with Hiccup trapped inside. Even Toothless was unable to free his friend from the sealed diving bell. Shipsbane however must have sensed the trouble and as thanks for freeing it from its chains, brought the bell to the surface and dropped it onto the deck of the ship, where, with the help of Barf and Belch, Hiccup was released from its casing.

While Hiccup, Fishlegs, and Mala were attempting to get the Eruptodon egg to its nesting area inside the Defender of the Wing's volcano on Meatlug in "Out of the Frying Pan", Astrid and Throk worried that it was taking them too long to get back. So Tuff came up with the idea to use the diving bell as a way to lower them in safely, so they can rescue their comrades before the lava rose too high. It was then coated with Eruptodon saliva, like the armor that the Defenders of the Wing wear, for protection against the immensely hot lava and with Barf and Belch's help, safely lowered Astrid and Throk into the volcano to rescue them. The chain holding it melted and broke however and the bell fell into the lava lake, with Astrid and Throk stuck inside. The heat resistant Eruptodon saliva was slowly being worn off, and the duo started getting overheated and delusional. Thankfully, Meatlug re-emerged with her three Riders, rescuing Astrid from the bell. The Great Protector then appeared and grabbed the chain and lifting the diving bell, with Throk still inside, back to safety.

In "Living on the Edge," it was used to pour gronckle iron on erupting volcanic vents.

After taking over Dragon's Edge in the previous episode, Viggo, Krogan, and the Dragon Hunters are seen using the diving bell in "The Wings of War, Part 1" to retrieve the Dragon Eye that fell into the Edge's volcano.

The Diving Bell, or an iteration of it, is used in the game, School of Dragons, which currently takes place on a timeline after Hiccup becomes chief. It is dependent on being attached to a ship, rather than having stilted legs. It is seen in both the "Secret of the Leviathan" Expansion, and the "Rise of Stormheart" Expansion, where the player must find the secret stash of Grimora toxin belonging to Nikora Stormheart underwater.

Hiccup also uses the principles of the diving bell to make a sort of diving helmet to go under water at a flooded portion of Impossible Island in the "Secret of the Leviathan" expansion.

The Diving Bell appears in this game on the island Valhalla Valley and serves a decorative purpose for the Legendary Submaripper.

The Diving bell is literally a giant, up-turned cauldron with a porthole on the side. The porthole is sealed with an amber-orange shaded Death Song amber alloy. It has three welded iron struts going past its lip to stand up on at the bottom of a body of water. This also lends some precariousness to the structure, but allows the person inside to swim out of it underneath when submerged. The bell is attached to a chain anchoring it to a ship which can lift and lower it.

Chronologically later versions in School of Dragons do not have the struts and adopts a more actual 'bell' shape. It stays suspended in the water by its anchor ship, still allowing a person to swim out from underneath it.

The Diving Bell allows human divers to get to deeper water by bringing a stationary source of air with them. Lowering the bell from air into water traps air inside that a human can breathe. This allows them to swim out and explore the area surrounding the bell underwater, as long as the diver allows for time to return to the bell to breathe more air.

Alternatively, due to its materials and reinforcement for use under the pressure of water, it can serve as a sort of boat in lava for a short time.

Shipsbane carrying the bell to the surface

Barf and Belch prying it open 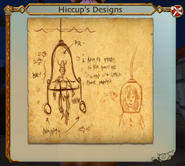 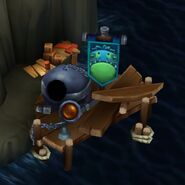 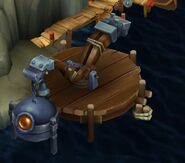 Retrieved from "https://howtotrainyourdragon.fandom.com/wiki/Diving_Bell?oldid=588159"
Community content is available under CC-BY-SA unless otherwise noted.