Dewdrop is a Raincutter that appears in the game Dragons: Rise of Berk.

Dewdrop is primarily swampy green with dark shades on her fin and wings and an underbelly comprised of yellow and green scales, mottled together. She has small yellow speckles on her wings and likewise on both sides of her body. Her spikes are a golden colour, as are her claws and eyes. 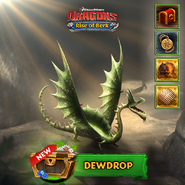 Retrieved from "https://howtotrainyourdragon.fandom.com/wiki/Dewdrop?oldid=530837"
Community content is available under CC-BY-SA unless otherwise noted.